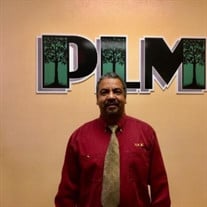 William “Larry” Peterson Sr., son of late William Lloyd Peterson and Arita Marie Bush Peterson Cruz born on December 6, 1960 in Washington, D.C. was called to be with the Lord February 6, 2021. Larry grew up in Halls Hill, a small community located in Arlington, Virginia where he was a well-known community leader and a proud member of Calloway United Methodist Church. His love and dedication to work began at an early age delivering newspapers. It was Larry’s lifelong friend Charles “Buck” Carpenter who helped ignite his passion for landscaping. Larry’s passion for entrepreneurship enabled him to convince his family team to devote themselves to the venture, and the incorporation of Peterson Landscape Maintenance (PLM) in 1986. Larry’s siblings Daniel, Kirk, and the late Wanda were all key figureheads in the foundation of the family business. Larry remained active in the daily operations and interactions with employees for thirty-four years. Shortly after the establishment of PLM, Larry met the love of his life Sandra “Sandy” Peterson. They were joined in marriage August 27, 1988. They are proud parents to Nicole, Dominic, TaLesha, and William Larry Jr. Larry had a positive outlook on life and lived life through simple pleasures of welcoming and entertaining others during the holidays. Larry had an uncanny ability to reach people in a deep and positive way. He was the happiest when surrounded by family and friends. Larry is renowned for his hard work, determination, love for those around him, and his wisdom. Larry was preceded in death by his father William Lloyd Peterson; mother Arita Marie Bush Peterson Cruz; and sister Wanda Denise Peterson-Wanzer. His memory will be cherished and kept alive by his adoring eternal wife and partner Sandy Peterson; his children Nicole Johnson, Dominic Williams (Savina), TaLesha Watlington (Robert), and Larry Peterson Jr; his eight grandchildren; Gregory Johnson Jr., Cameron Johnson, Lilyanah Johnson, Ava Peterson, August Williams, Malachi Watlington, Dawson Williams, and Malia Watlington; two brothers Daniel Peterson (Henriette) and Kirk Peterson (Donna), numerous nieces, nephews, cousins; and other relatives and friends who loved Larry very much.

The family of William "Larry" Peterson Sr. created this Life Tributes page to make it easy to share your memories.

Send flowers to the Peterson family.