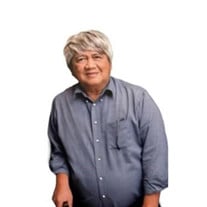 In Loving Memory of Wilfredo, “Willy,” Santiago Quiambao On Friday, May 20th, at 2:13 am, his family surrounded Wilfredo Santiago Quiambao as he was called home by his creator. He is reunited with his father and mother, Manuel and Virginia Quiambao, his sisters, Socorro Maguigad, Manuelita Tongson, Bernadette Reyes, nephew Leonardo Maguigad, and niece, Josephine Tongson. He is survived by his beloved wife of 42 years, Bibiana Samson Quiambao, children, Roberto and Virginia Arroyo, Joanna Quiambao, and Emmanuel Quiambao, bonus grandchildren and grandchildren, Vanessa Arroyo, Nico Miranda, Selena Arroyo, and Roberto Cortez Arroyo. On November 7, 1945, Willy was born in Tarlac City, Philippines. He graduated from Mapua Institute of Technology in Finance and Banking. He had a successful career in pharmaceutical sales before migrating to the United States in the late 1970s with his mother, sisters, and cousins. He joined the U.S. Postal Service in 1984 and served as a mail carrier and handler for nearly 30 years. He received numerous awards and accolades for his exemplary attendance and performance. Willy was a devoted husband, father, uncle, cousin, and friend. There was nothing more important to him than family, to whom he was fiercely loyal. Holidays and weekends were always spent with family. He enjoyed fishing, watching Filipino T.V., listening to music, and playing his guitars and drums. In the Philippines, he founded and played the drums for the “The Flintlocks” with his beloved friends and cousins Bruce Brown and the late Graham Brown, whom he loved as brothers. Willy loved to make himself and others laugh! He often found humor in any situation. He was resourceful, humble, and always expressed gratitude for the simple things in life. He firmly believed in the importance of education and made it a priority for his children. The bereaved family would like to thank everyone for their ongoing support and love during this difficult time. We find comfort in knowing he was loved by many. Please see the arrangements below. Wednesday, June 1st Wake/Visitation: 6:00pm to 9:00pm Miller Funeral Home 3200 Golansky Blvd., Woodbridge, VA 22192 Thursday, June 2nd Funeral Mass: 11:00am Sacred Heart Catholic Church 12975 Purcell Road, Manassas, VA 20112 Burial: 1:00pm Fairfax Memorial Park 9900 Braddock Road, Fairfax, VA 22032 Life Celebration: Please join us for a reception at: Ornery Beer Company 3950 University Drive, Suite 106 Fairfax, VA 22030 Parking is available at Old Town Plaza Fairfax Public Parking

In Loving Memory of Wilfredo, &#8220;Willy,&#8221; Santiago Quiambao On Friday, May 20th, at 2:13 am, his family surrounded Wilfredo Santiago Quiambao as he was called home by his creator. He is reunited with his father and mother, Manuel and... View Obituary & Service Information

The family of Wilfredo "Willy" Santiago Quiambao created this Life Tributes page to make it easy to share your memories.

In Loving Memory of Wilfredo, “Willy,” Santiago Quiambao
On...

Send flowers to the Quiambao family.