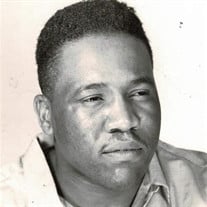 Retired United States Army, 82. Wilbur Louis Henderson was born in Jamaica Queens, New York to Wilbur Louis Henderson Sr. and Maude Epps. He spent most of his young life in Middlesex County, Virginia until he joined the Army a few days shy of his 17th birthday. During his military career he was deployed to Vietnam twice. Healso was stationed in Germany for most of his tours. It was there he met his wife of 61 years, Helga H. Theobald and also the birth place of his children. He ultimately retired after 27 years serving his country. After retirement he worked for British Airways security. He drove trucks for the VanMeter and also the Blount Corporation. He worked at Piscataway and Blue Plains, both jobs he retired from. His last and final job was as a Prince William County special needs bus driver. It was by far his favorite as he would often tell us stories about the children, who adored him. He was adored by young and old alike and his legacy is that he left a lasting positive impression on everyone he met in his lifetime. He will be truly missed. Mr. Henderson is survived by his wife of 61 years, Helga H. Henderson, his children, Monika Henderson, Christina Ostrom, Silvia Armstrong, and Thomas Henderson, his 7 grandchildren, 15 great grandchildren, 2 great great grandchildren, his surviving siblings, Arlene Gray, Pearl Booker, Eddie Yates, and best boy hood friend/cousin, James Harris. A memorial service will be held Saturday, March 9, 2019 at 12PM at Miller Funeral Home, 3200 Golansky Blvd., Woodbridge, VA 22192.

The family of SFC Wilbur L. Henerson created this Life Tributes page to make it easy to share your memories.

Send flowers to the Henerson family.