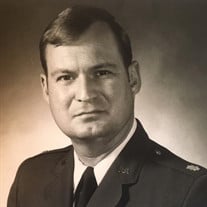 Lt. Col (retired) Dr. Wayne Linwood Andrews Jr., of Montclair, Virginia, passed away on May 13, 2019. Born in Salem, Massachusetts on May 4, 1952, Wayne was the son of Anna Stone Andrews and Wayne Linwood Andrews. He is survived by his wife, Donna; son, Wayne L. Andrews III; daughter, Jill Marie Demko; grandson, Derek; and soon-to-be granddaughter baby Andrews. Wayne also leaves behind a sister, Priscilla Mercer. Wayne graduated Class of 1970 Salem High School, attended the U.S. Naval Academy Prep School, and then the U.S. Coast Guard Academy where he majored in Nuclear Engineering. He went on to graduate from Lowell Technological Institute in Lowell Massachusetts where he was commissioned into the United States Air Force. Wayne served honorably in the United States Air Force for 20 years as a Nuclear Engineer. After his retirement from the military, he spent more than 10 years in the federal government at the Defense Nuclear Facilities Safety Board (DNFSB). As a Senior Executive Service (SES) Engineer, he was responsible for oversight of nuclear weapons sites. After retiring from the federal government, Wayne worked as a Senior Technical Director for several private sector consulting firms. For the last several years, he knew he couldn’t give up “mentoring,” so he became an Adjunct Professor at the University of Maryland teaching undergraduate and graduate courses in math and project management. Wayne had an undeniable love of learning, earning three master’s degrees – in Business Administration, Nuclear Engineering, and Space Technology – and a Doctor of Science degree in Engineering Management. Wayne also was a licensed Professional Engineer in the Commonwealth of Virginia, a graduate of the Harvard Kennedy School’s Senior Executive Fellows Program, and an active member of the American Nuclear Society. A devout Christian and loving husband and father, Wayne was happiest at home with his family and friends. He embraced every opportunity he could to mentor people and give them career (or life) advice. He would do anything for his friends and family. Wayne’s second love was the military; he was a proud military officer who instilled a love for the military in everyone he met. Visitation will be held at Miller Funeral Home in Woodbridge, Virginia on May 24, 2019 from 5:00 pm to 8:00 pm. A funeral in celebration of his life will be held on May 25, 2019 at 10:00 am at Miller Funeral Home. Interment will be at Arlington National Cemetery at a later date. Memorial donations may be made to The Fisher House Foundation (www.fisherhouse.org), a wonderful charity that supports military families. “Our success is measured by what we do. Our souls are measured by what we give.” – Winston Churchill

Lt. Col (retired) Dr. Wayne Linwood Andrews Jr., of Montclair, Virginia, passed away on May 13, 2019. Born in Salem, Massachusetts on May 4, 1952, Wayne was the son of Anna Stone Andrews and Wayne Linwood Andrews. He is survived by his wife,... View Obituary & Service Information

The family of Wayne Linwood Andrews Jr. created this Life Tributes page to make it easy to share your memories.

Send flowers to the Andrews family.