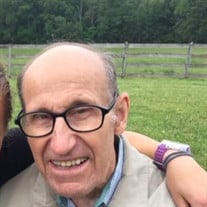 Valentine (“Val”) was born Valentine s Day, February 14, 1934. His actual and “true” birthday is February 13th. This error carried forward for many years of pre-schooling and many years of professional employment, military service, and even through recent years of retirement. Valentine attended a country school, Auburn, in Auburn, Ohio, for the full 12 years and was class president in his Senior year. After high school, he entered the Benedictine St. Meinrad Catholic Seminary in southern Indiana for one year before returning to the family farm and enrolling with Western Reserve University in Cleveland, Ohio, to study geology and geophysics, earning a Baccalaureate degree with honors. In 1957 Val decided to seriously study geology. He began his studies at Western Reserve University under special scholarship to study glacial geology and earned his PhD degree at the University of Illinois under the Air Force ROTC Program. Val started his military career in the summer of 1960 with the Air Force Ballistic Missile Commission. He was a key element in a small group of engineers and scientists to select 21 sites for deployment of ballistic missile silos in northern United States and Alaska. When he finished his three years of active duty, he stayed on in the Air Force Reserves for 28 additional years. After leaving active Air Force duty, he worked at Esso Research and Engineering in Houston, Texas searching for drilling sites for oil and gas and switching to problems associated with deep well drilling. He continued in the research field at the Army Research Center in Arlington Virginia and continued his career at the Geological Survey in Reston, Virginia until his retirement in 1999. Val married his Auburn, Ohio, teenage sweetheart, Donna Starr, in 1958. They had four children The oldest son was killed in a motorcycle accident working on an engineering degree at the University of Illinois in 1984. The other two sons and a daughter also earned engineering degrees, got married, and gave Val sixteen grandchildren and eight great grandchildren. Val’s hobbies included driving from Arlington, Virginia, 365 miles on weekends, to the old family farm in Auburn, Ohio. The second love of his life was working on a 1931 Model A Ford. He had bought this rusty old car at age 16 and restored it to factory finish many years later. It now resides in his son’s garage. Note 2021: Val wrote this obituary himself in April of 2020 and now has two more great grandchildren. In 2016 Val and his wife Donna had moved to an apartment in Westminster at Lake Ridge retirement community, as Val was challenged with a type of Parkinson’s disease which eventually left him in a wheelchair. He was active in Men’s coffee, regular exercise, and enriched his faith by participating in Men’s Bible Study. He died peacefully in his sleep on a Sunday morning, having told his family that he placed his trust in Jesus. In lieu of flowers, contributions may be made to the Westminster Supporting Fund, 12191 Clipper Drive, Lake Ridge, VA 22192.

The family of Valentine Zadnik created this Life Tributes page to make it easy to share your memories.

Send flowers to the Zadnik family.