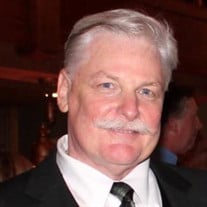 Steven Bart Jones of Manassas, Virginia passed away in the arms of his beloved wife, Anita, on February 3, 2022. Known as Steve to some and as Bart to others, he was born in Birmingham, Alabama to his parents, Mary Ann Geer and Carl Dean Jones. He is survived by his wife, Anita Jones; a dogter, Lille; a sister, Trina Kay Selby, and many cousins, nieces and nephews. Steve was very loving and caring husband, always making Anita his number one priority. He was also a very loyal, kind and generous friend to many. He had the ability to just start up a friendly conversation with anyone he met. Steve grew up in Clinton, Maryland, and enjoyed pole vaulting during his high school and early college years. As a senior at Surratsville Senior High School, Steve was the Maryland State Pole Vault Record Holder and Champion in 1974. Steve served in the U.S. Navy as a Deep Sea Diver, a position that he enjoyed, and he was very honored to serve his country in this capacity. After the Navy, he became a federal government contractor for a few years and then began an almost 30-year career with the Federal Government at the U.S. House of Representatives, USIA and the U.S. Department of State. He passed away during his tenure at the U.S. Department of State shortly before his anticipated retirement in July of 2022. Steve waws an avid genealogist and enjoyed history. He was a member of the Mayflower Society, the Jamestowne Society, Sons of the American Revolution and the Order of Saint John of Jerusalem Knights Hospitaller (Past Commander). Also, Steve had a love of antiquie trucks. he especially enjoyed driving his 1930 Ford to the dump. His fun-loving attitude was "if you have a truck, you should use it as a truck." In Virginia, friends may visit Miller Funeral Home, 3200 Golansky Boulevard, Woodbridge, Virginia on Sunday, February 13, 2022, from 12:00 to 2:00 p.m. with a funeral service immediately following at 2:00 p.m. After the service, everyone is invited to a repast at the Courtyard Marriott Potomac Mills, 14300 Crossing Place, Woodbridge, Virginia. In Florida, friends may visit Emerald Coast Funeral Home, 161 Racetrack Road, NW, Fort Walton Beach, Florida on Friday, February 18, 2022, from 9:00 to 10:00 a.m. with funeral service immediately following. Interment will follow at 2:00 p.m. at Barrancas National Cemetery, Naval Air Station, 1 Cemetery Road, Pensacola, Florida. In lieu of flowers, donations to Saving the Soul Pet Rescue, Inc. (Fort Walton Beach, Florida) or to any No-Kill Animal Shelter would be greatly appreciated.

Steven Bart Jones of Manassas, Virginia passed away in the arms of his beloved wife, Anita, on February 3, 2022. Known as Steve to some and as Bart to others, he was born in Birmingham, Alabama to his parents, Mary Ann Geer and Carl Dean Jones.... View Obituary & Service Information

The family of Steven Bart Jones created this Life Tributes page to make it easy to share your memories.

Steven Bart Jones of Manassas, Virginia passed away in the arms...

Send flowers to the Jones family.