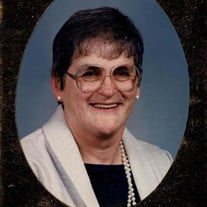 Ruth Francis Anderson, also known as Grammy to many, was born on December 16, 1930, and on February 14, 2022, Ruth went home to be with Jesus, her Lord and Savior. The beloved wife of the late Samuel Frank Anderson. She was the loving mother... View Obituary & Service Information

The family of Ruth Francis Anderson created this Life Tributes page to make it easy to share your memories.

Ruth Francis Anderson, also known as Grammy to many, was born...

Send flowers to the Anderson family.