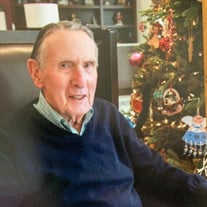 Not sure what to send?

Roy W. Richey passed away peacefully on April 27, 2022 at Sentara Hospital in Woodbridge, VA. Roy would have been 87 years old on July 30, 2022. Roy was born in Brooklynn, NY to Clair and Althea Richey. His childhood summers were spent with his grandparents in Lock Haven, PA. At the age of 10, he met his best friend and future wife, Janet Welch. Some of his fondest memories were attending movies and enjoying ice cream with Janet and his Lock Haven friends. On August 2, 1958, he and Janet were married at the Dunnstown United Methodist Church. After a brief time teaching high school and coaching track and field, Roy joined his father’s electrical contracting business. Roy would often say that the years working alongside his father were some the most memorable times of his career. Roy suffered from childhood asthma, but eventually outgrew it and became an avid runner. He lettered in track and field at Sewanhaka High School and later at Adelphi College. He went on to run numerous marathons including the New York City and the USMC in Washington D.C. His happiest runs were with family and friends at Sunken Meadow Park, Long Island. Sadly, the love of his life, Janet, became ill with a Parkinson’s like disease. Roy continued his lifelong devotion to Janet by lovingly caring for her for 15 years, until she succumbed. He was deeply saddened but continued to make the best of God’s grace. Roy was never one to sit and let life come to him. He filled everyday with purpose. He earnestly researched the Richey family lineage to discover his great-great grandfather Robert Richie was a private serving in the Revolutionary War. At the age of 83, he and his daughter, Kelly, traveled to Scotland to further research Robert Richie’s life. Always ready to lend a hand, he held the titles of Smithtown Booster Club Chairman, Hauppauge Methodist Church Lay Leader, President of Elmont Electric Inc., Eagle Scout, NECA President, Westminster of Lake Ridge Treasurer, and Spiritual Life Chairman. Roy was passionate about every position he held, but his greatest passion in life was being a loving husband and father. He is survived by his daughter Kelly; son Chris and wife Jeannine; son Craig and wife Karen; son Steven and wife Heidi; grandchildren Christopher and wife Kathryn, Sean and wife Samantha, Emily and husband Sean, Gabriella, Anneliese, Garrett, Hailey and Nathan; and great grandchildren, Carter, Declan, Sabrina and Jack. Residents, friends and family are invited to Westminster at Lake Ride, VA to celebrate Roy’s life on June 3, 2022 at 11:00 in the Potomac Room. Join us for refreshments immediately following the service. Roy will be interred at Dunnstown Methodist Church alongside his wife, Janet, in Lock Haven, PA. The service is scheduled for July 9, 2022 at 11:00. Friends of Roy are welcome to attend. In lieu of flowers, gifts in Roy’s memory may be made to the Westminster Ingleside Foundation. Online: https://inglesideonline.org/foundation/online-giving/ Or mail: WLR Resident Supporting Fund, 5121 Broad Branch Road, NW, Washington, D.C. 20008.

Roy W. Richey passed away peacefully on April 27, 2022 at Sentara Hospital in Woodbridge, VA. Roy would have been 87 years old on July 30, 2022. Roy was born in Brooklynn, NY to Clair and Althea Richey. His childhood summers were spent... View Obituary & Service Information

The family of Roy W. Richey created this Life Tributes page to make it easy to share your memories.