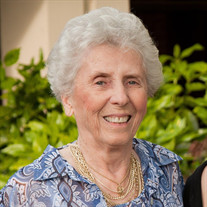 Rose Mary Griggs, 89, wife, mother, sister and retired U.S. Civil Service employee died November 6th in Woodbridge, Virginia of natural causes related to Alzheimer’s disease. Born in West Monroe, Louisiana, Mrs. Griggs moved with her family to Sarasota, Florida where she lived until graduating from high school. She began nursing school in Jacksonville, Florida where she met her future husband Ross, a U.S. Navy enlisted man, who had to ask her three times to marry him before she said yes and therefore forced to suspend her nurse’s training. She lived in Jacksonville, Florida; Hutchinson, Kansas; North Kingstown, Rhode Island; and Milpitas, California before Ross’s retirement from the Navy. Settling with her husband and two sons in his home state of Utah, both she and Ross continued their careers as U.S Civil Service employees working for the U.S. Air Force at Hill Air Force Base. While raising her children Rose Mary rose through the ranks to retire at the GS-13 level - a rarity for a woman without a college degree in those days. In the latter phase of her career she served as an Air Force logistician supporting various Air Force aircraft development and test programs, some highly classified, requiring her to travel regularly to the Air Force Nevada Test and Training Range, commonly known as Area 51. After her retirement Mrs. Griggs lived in Layton, Utah; Charlottesville, Virginia; and Spring Hill, Florida before moving to Woodbridge, Virginia to be near her sons as her husband’s health declined. Preceded in death by her husband Ross of 57 years, survivors include son Martin and his wife Laurie of Fairfax, Virginia; son Christopher of Alexandria, Virginia; brother William Troffer of New York, New York; four grandchildren and two great grandchildren. A Mass of Christian Burial will be held Friday, November 15, 2019 at 11 a.m. at Saint Elizabeth Ann Seton Catholic Church, 12805 Valleywood Drive, Woodbridge, VA 22192. Interment will be held Monday, November 18, 2019 at 10 a.m. at Quantico National Cemetery in Triangle, VA. In lieu of flowers, the family requests memorial donations be made to: Alzheimer’s Association https://www.alz.org/ or Catholic Charities https://www.catholiccharitiesusa.org/

The family of Rose Mary Griggs created this Life Tributes page to make it easy to share your memories.

Send flowers to the Griggs family.