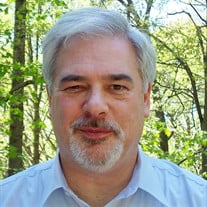 Robert John Crossland of Manassas, VA, passed away unexpectedly of natural causes on Friday, August 21, 2020, at the age of 66. A beloved husband, father, and friend, he saw each day as an opportunity for kindness and was a guiding light for those who knew him. That light will continue to shine on, though we will miss him profoundly every day. “Bob” Crossland was born on August 17, 1954, in Hackensack, NJ, to Fred and Joanna Crossland. He grew up in a farmhouse in Montvale in northern New Jersey. In his childhood, Bob and his older brother, Fred, were responsible for cooking the family meal once a week, even if that meant peanut butter sandwiches for dinner. Bob learned how to work the grill around age seven and quickly became a “grill master.” He and Fred also loved playing with the HO model train setup their father built for them. The family took several unforgettable vacations, including one trip where Bob got lost in Rome, but summer was never complete without visiting the family homestead in Mazeppa, PA. Bob attended Pascack Hills High School, where he became interested in photography, served on the staff of the literary magazine Echoes, was elected president of the National Honor Society, and met his future wife, Janine Koehler. He followed his brother to Amherst College after graduation. There, he majored in English and was a member of the Alpha Delta Phi fraternity. In the summer of 1976, Bob traveled to Concord, MA, as a photographer for the National Bicentennial Committee. His passion for photography flourished in his twenties, and he experimented with photographing natural landscapes, multiple exposures, and making familiar subjects abstract. He would continue taking photographs all his life. Bob moved to Philadelphia after college, where he worked as a store manager for Ritz Camera. Around this time, Bob reconnected with Janine, and they soon began dating. They moved to the Washington, DC, area in 1980 and were married later that year. There, he worked for Western Union as a salesman and then branch general manager until 1987. Bob’s life was changed forever when he became a father to Sarah (born 1989) and Tom (born 1991). Bob loved his family and wholeheartedly embraced his new life of soccer games, Cub Scout meetings, pool parties, and family road trips. Bob was always a collector, and he enjoyed taking his family to toy shows and flea markets in search of Matchbox cars and antiques. After his brother was diagnosed with ALS in the mid-nineties, Bob joined the Dale City Masonic Lodge (No. 319), where he found solace and fellowship. Bob was inducted as the Worshipful Master of the Lodge for the year 2000, and he went on to serve as the Lodge’s Secretary for 20 years. Through Masons, he made many lifelong friends. Bob always had a passion for helping people, and he found a vehicle for that passion in his career as an insurance agent. Bob worked for Prudential, Nationwide, Morgan Stanley, Rich Insurance Agency, and Capital Group Benefits before finally starting his own business, Crossland Insurance, in 2009. In his own words, he was known as “the benefits guy” and had a reputation as a compassionate problem-solver. He was also an active member of his BNI networking chapter and served as its president until his death. Whenever asked if he was going to retire, he said he would when he “stopped having fun.” In his later years, Bob took pleasure in going to concerts with his family. His love of music was all-encompassing, ranging from the Beatles to Green Day to Neutral Milk Hotel. He swam every day in summer, and in 2017 he took up ballroom dancing with Janine. Bob was a kind soul who had a special connection with animals, from frogs and turtles to rabbits and cats. He especially loved his pets, including his current cat, Dexter, whom he spoiled and brushed daily. He had a quick wit and a boundless sense of humor. A connoisseur of hot sauce, he was an avid fan of horror movies and James Bond. He also really loved vegetables. Bob is preceded in death by his parents, Fred and Joanna Crossland, and his brother, Fred Crossland, Jr. He is survived by his wife of almost forty years, Janine Crossland; his daughter, Sarah Crossland, and her husband, Matthew MacFarland; and his son, Thomas Crossland, and his fiancée, Mackenzie King. Donations in Bob’s name can be made to the ALS Association in honor of his brother, the Alzheimer’s Association in honor of his mother, or the Masonic Home of Virginia. A celebration of life will be held at a later date, when it is once again safe to gather. Until then, his family asks that you play your favorite Beatles song in his honor.

Robert John Crossland of Manassas, VA, passed away unexpectedly of natural causes on Friday, August 21, 2020, at the age of 66. A beloved husband, father, and friend, he saw each day as an opportunity for kindness and was a guiding light... View Obituary & Service Information

The family of Robert John Crossland created this Life Tributes page to make it easy to share your memories.