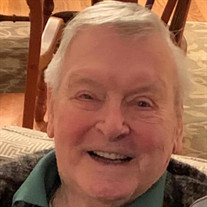 Richard “Dick” Nordberg, 88, of Westport Lane, Woodbridge VA, died December 8, 2020, at Sentara Northern Virginia Medical Center after complications from major surgery. Dick was a graduate of the University of Rhode Island where he played baseball and pitched for the Rams and received a degree in Business. He was a retired Army Officer where he served two tours in Vietnam and earned several awards including the Bronze Star with Oak Leaf Cluster. He was a member of the American Legion and the Knights of Columbus. Dick was a devout Catholic and a member of Saint Elizabeth Ann Seton Catholic Church in Lake Ridge Virginia. Dick was preceded in death by his parents, the late William Gunnar and Nellie V. Nordberg and his brothers William A. and Edward P. Nordberg. Dick Nordberg is survived by his wife of 60 years, Netty; sons Richard Nordberg JR (Meg) of Oak Hill VA, Chris Nordberg (Kathy) of Northville MI, daughter Kim Payne (John) of Manassas VA, goddaughter Linda Ruff of Springfield VA; his eight grandchildren Maley, John, Taylor, Lauren, Christian, Alec, Brendan and Benjamin; and many nieces and nephews. Dick was a native of Mansfield Massachusetts. He enjoyed golf and loved sports. He was a passionate fan of the Boston Red Sox and the New England Patriots. He was actively involved in coaching his children in sports and there was no bigger fan in the stands cheering them on. He continued this tradition cheering on his grandchildren at their events. He was an avid reader and there has yet to be a crossword puzzle that he could not solve. Dick enjoyed family, friends and truly adored his grandchildren. It has been said that Dick Nordberg’s smile was contagious and that he never met a stranger as he befriended everyone. There will be a visitation scheduled from 5:00 PM to 7:00 PM Sunday December 20, 2020 at the Miller Funeral Home, 3200 Golanksy Blvd. Woodbridge, VA 22192. Mass scheduled for 11:30 AM Monday December 21, 2020 at Elizabeth Ann Seton Church, Lake Ridge VA. Interment will follow at the Quantico National Cemetery 18424 Joplin Road (Route 619) Quantico, Prince William County, Virginia, 22172. In lieu of flowers, contributions can be made in the memory of Dick Nordberg to the Fisher House: Ways To Give https://fisherhouse.org/ or use this one Fisher House Foundation and they can navigate to the WAYS To Give Section right on the main menu.

The family of Richard Nordberg created this Life Tributes page to make it easy to share your memories.

Send flowers to the Nordberg family.