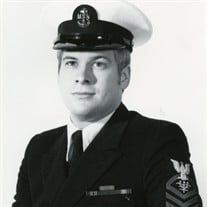 OTCM Richard Leo Hoffmann, 67, of Woodbridge, Virginia, beloved Husband, Father, Grandfather died November 9, 2021 at Walter Reed National Military Medical Center. Following a dedicated 22 year service to his country in the United States Navy, he retired in 1994 as a Master Chief Petty Officer. He then had a 22 year career at The Home Depot with the majority of his time focused in the IT, then the Human Resources fields. His passion for helping people, seasoned with his concern and always present sense of humor, was the major driving force in his professional life. The joys of his life were his family, his four legged “sons”, his love for military history, and numismatics. He was preceded in death by his parents the late Frederick and Patricia Hoffmann, his sister Ann Hoffmann, and father-in-law Ian Lindsay of Stokes Bay, Ontario Canada. He is survived by his wife of 40 years, Janice of Woodbridge, VA. His sons Justin (Lindsay) of Louisa, VA; Christopher (Jennifer) of Dumfries, VA; Patrick (Kelly) of Front Royal, VA; and Richard (Nadia) of Santa Clara, CA; and six grandchildren. He is also survived by his brother Frederick (Theresa) Hoffmann of Burtonsville, MD; his sisters Joan (Robert) Davis of Millsboro, DE; Christine (Leo) McDonald of Germantown, MD; Patricia (Michael) Towle of Williamsburg, VA; and his mother-in-law Shirley Lindsay of Owen Sound, Ontario Canada. A funeral mass will be held on Friday, November 19, 2021 at 11:00 a.m. at Mother Seton Parish, 19951 Father Hurley Blvd., Germantown, MD 20874. In lieu of flowers contributions may be made in his memory to the MDS/AML Foundation at mds-foundation.org .

The family of Richard Leo Hoffmann created this Life Tributes page to make it easy to share your memories.

Send flowers to the Hoffmann family.