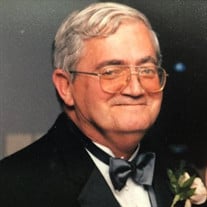 Randy Gerald Seamans, beloved husband, father and grandfather, of Montclair, Virginia passed away on February 23, 2021, at the age of 74. Born in Fort Smith, Arkansas, Randy graduated from Arkansas Tech University in 1968 with a degree in accounting. Upon graduation, Randy enlisted in the United States Army and served with distinction in the field of military intelligence. His military career took him to various posts around the country and world, from Hawaii to Thailand to Germany, among others, and finally, Virginia. Randy retired from the Army as a major in 1988, at which time he began the second phase of his career of service with the Department of Defense (Department of the Army). He worked as a part of the United States Army Intelligence and Security Command until 2015, when he retired after 47 years of service to the United States Army. Randy enjoyed spending time with his family, especially his wife Linda Beth King Seamans, with whom he recently celebrated 50 years of marriage, as well as his children and grandchildren. His hobbies included gem-mining and collecting, genealogy and cheering on (or yelling at) the “Washington Football Team.” Randy especially enjoyed spending time with his family at the Outer Banks of North Carolina, where he and his wife had a vacation home. Randy is survived by his wife Linda and their three children – Melinda Crissy Hemphill (Jay) of Wake Forest, North Carolina, Brian Seamans (Jennifer) of Durham, North Carolina, and Jonathan Seamans of Raleigh, North Carolina, as well as his seven grandchildren. He is also survived by his sisters, Jana Weeks (Mike) of Greenwood, Arkansas and Ann Gray (Tommy) of Little Flock, Arkansas, as well as four nieces and one nephew. He was preceded in death by his parents, Melba and Tillman Seamans. A private family service will be held on March 12, 2021, at Miller Funeral Home in Woodbridge, Virginia. Randy will be buried at Arlington National Cemetery, where a graveside service will be held at a later date. In lieu of flowers, the family suggests that contributions be made to the American Cancer Society or the American Heart Association.

Randy Gerald Seamans, beloved husband, father and grandfather, of Montclair, Virginia passed away on February 23, 2021, at the age of 74. Born in Fort Smith, Arkansas, Randy graduated from Arkansas Tech University in 1968 with a degree in... View Obituary & Service Information

The family of Randy Gerald Seamans created this Life Tributes page to make it easy to share your memories.

Send flowers to the Seamans family.