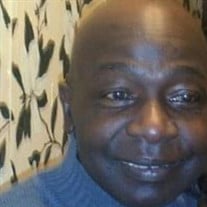 Oscar Eugene Banks was the 2nd eldest of 7 siblings. He was born to the late Clara Mae Banks on November 22, 1954 in Bessemer, Alabama. Oscar graduated from Jess Lanier High School in 1973. Immediately after he graduated, Oscar joined the United States Army in 1973. He successfully completed his term of 20 years, until his retirement 1993, when he relocated to Woodbridge, Virginia. During his time in the military, he met his sweetheart, Chom Soon Park and they were married on October 28, 1975. It was a union that would last 45 years. Of this union, they were blessed with 3 children, Diana Nichelle, Kenny Charles and the late Mikiko Nichelle; as well as a bonus son, Michael Anthony Fields. Oscar was employed with the United States Postal Service for 20 years, until his retirement in 2019. Oscar was a family man, he loved his family and always provided, no matter what. He also loved his church, Fort Belvoir Chapel, where he was very active and taught church school. He definitely loved his Bible and The Lord. One more thing Oscar loved was his manicures. Every two weeks, he HAD to have his manicure, pedicure and massage. And, of course, his favorite team was the Denver Broncos. GO, BRONCOS! Oscar went to his rest peacefully on April 27, 2021. He leaves to mourn his loss, his loving wife, Chom Banks; two children, Diana Banks and Kenny Banks, “bonus son” Michael Fields and six grandchildren, Kasem Fields, Kyree Tabor, Jaquan, Javon, Tashaun and Jalen. He also leaves to mourn, his two sisters, Margaret Banks and Angela Banks, both of New York; one brother, Ronald Banks, of New York; one aunt, Ethel Augusta (Brown) of Cleveland, Ohio, as well as a host of family and friends. Oscar is preceded in death by his two sisters, Patricia Banks and Lisa Smith and one brother, Johnny Banks. The family will receive visitors Saturday, May 15, 2021 from 10-11 a.m. with a service at 11 a.m. at Belvoir Chapel, 5950 12th Street, Ft. Belvoir, VA 22060. Interment at Arlington National Cemetery will be at a later date.

Oscar Eugene Banks was the 2nd eldest of 7 siblings. He was born to the late Clara Mae Banks on November 22, 1954 in Bessemer, Alabama. Oscar graduated from Jess Lanier High School in 1973. Immediately after he graduated, Oscar joined the United... View Obituary & Service Information

The family of Oscar Banks created this Life Tributes page to make it easy to share your memories.

Oscar Eugene Banks was the 2nd eldest of 7 siblings. He was born...

Send flowers to the Banks family.