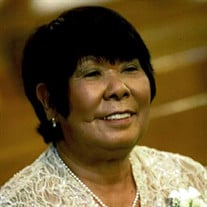 Mitsuko (Tomoyose) Ruch of Woodbridge, Virginia, peacefully departed this life in her home on November 11, 2019. She was born on June 10, 1942 in Okinawa, Japan to the late Ziuzo and Ushi Tomoyose. Mitsuko grew up in Okinawa with her parents and seven siblings. During her childhood, she spent a lot of time helping on the family farm. As a young lady, she worked in the cafeteria on the Kadena Air Base in Okinawa. This is where she met a young, handsome gentlemen named Alfred David Ruch, Jr., who frequently came in to eat his meals. Mitsuko and Al dated for a year, fell in love, and were married on September 10, 1968. Leaving her family in Okinawa, Mitsuko became a devoted wife and moved to the United States with Al, as he remained on active duty in the Air Force. A few years later, Mitsuko and Al welcomed two beautiful daughters, Sherry and Michelle. In 1979, Mitsuko and Al settled in Woodbridge, VA to raise their family. Mitsuko affectionately became known as “Yuri” by her family and friends. She took pride in being a homemaker and tending to the needs of not only her family, but to all the neighborhood friends and children. She remained close with her family in Okinawa through frequent phone calls and trips back home and supported them however possible. Mitsuko never took for granted the life she and Al had established, always instilling in their daughters the value of family, friends, and hard work. They enjoyed spending time together, often traveling to Pennsylvania to spend time with her sister-in-law Jackie, and brother-in-law, the late Jim Love. Mitsuko was a wonderful cook and loved gathering with family and friends to enjoy a meal. She was especially known for her delicious egg rolls and stir-fry. Mitsuko also kept her home and yard meticulous and enjoyed gardening and tending to her beautiful flowers. After Al passed in 2003, Mitsuko cherished her time with her family and friends even more. She would be your first call in the morning, and if you didn’t answer, you better believe she would continue to call until you picked up. Mitsuko absolutely loved and adored her three grandchildren and was known to them as “Oba.” She always wanted to know how they were doing and never missed an opportunity to spend time with them. Mitsuko was preceded in death by her parents, her husband of 35 years, and three brothers, Takao, Leushe, and Leuie Tomoyose. She leaves to cherish her memory, her daughters Sherry Ruch (John O'Farrell) and Michelle Robinson (Paul); three grandchildren, Nathaniel, Violet, and Miles; four sisters Sziko Oshiro, Cheiko Nakoo, Turuko Nakamurg, and Kiyoko Toida; and sister-in-law, Jacqueline Love. She also leaves a host of lifelong friends who will miss her dearly. The family will receive visitors Tuesday, November 19, 2019 from 11AM-12PM with a service at 12PM at Miller Funeral Home, 3200 Golansky Blvd., Woodbridge, VA 22192. Interment will follow immediately after the service at Quantico National Cemetery in Triangle, Virginia for both Mitsuko and her husband, Alfred Ruch, who will receive military honors. In lieu of flowers, donations may be made to American Cancer Society (www.cancer.org)

Mitsuko (Tomoyose) Ruch of Woodbridge, Virginia, peacefully departed this life in her home on November 11, 2019. She was born on June 10, 1942 in Okinawa, Japan to the late Ziuzo and Ushi Tomoyose. Mitsuko grew up in Okinawa with her parents... View Obituary & Service Information

The family of Mitsuko T. Ruch created this Life Tributes page to make it easy to share your memories.

Send flowers to the Ruch family.