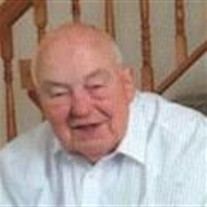 Marvin Edwin Wilkins, a 52 year resident of Dumfries, Virginia, died at INOVA Fairfax Hospital of complications from cancer treatment on October 3, 2019. Marvin was 82 years old at the time of his passing. He is survived by his two sons, Michael, of Mclean, VA and David, of Stafford, Virginia and his only sibling, sister Sylvia, of Brush, Colorado. Marvin is also survived by his four grandchildren; Michelle, Melissa, Megan, and Matthew; and daughter’s in law Gloria Wilkins and Mary Wilkins. He is preceded in death by his parents, Donald and Alice Wilkins; and his wife, Agnes Wilkins, married to Agnes for 47 years. Marvin Wilkins was born on October 14, 1936 in Scottsbluff, Nebraska and grew up in Wyoming, living in Wyoming until his graduation from the University of Wyoming in 1959. He was a Civil Engineer and certified Professional Engineer. After graduation from the University of Wyoming, Marvin worked for the California Highway Department until he was drafted into the U.S. Army in 1960. He subsequently served at Ft. Belvoir during his two years in the Army, where he met his future wife, Agnes Rosalie Wilkins, whom he married in 1961. After his honorable discharge from the U.S. Army, Marvin moved his new wife and infant son Michael to Redding, California, where his son David was born and he continued his pre-Army work with the California Highway Department. Marvin and family moved back to Virginia in 1967. Marvin took an engineering position with the Department of Defense as a Civil Engineer, working at Ft. Belvoir until he retired in 1995. Marvin worked for the town of Dumfries for ten years as the Maintenance Supervisor until retiring a second time in 2005. Marvin was a dedicated member of the Quantico Lion’s Club and spent many hours supporting Lion’s club events in the Dumfries/Triangle/Quantico area. He also coached Little League baseball for several years in Dumfries. However, his primary passion was spending time with his family, especially his children and grandchildren. His personal travel with his wife, friends, and family took him to China, Australia, Costa Rica, Guatemala, El Salvador, and Alaska, visiting his son Michael overseas or traveling with Jon and Gizzy Slocum, next door neighbors in Dumfries and lifelong friends. Services are scheduled for Friday, 18 October 2019 at Miller Funeral Home at 1100 hours. Burial will follow at Quantico National Cemetery at 1300 hours with full military honors. The family will receive visitors from 6-8 pm on Thursday, 17 October 2019 at Miller Funeral Home, 3200 Golansky Boulevard, Woodbridge, VA 22191. Contributions may be made to the American Cancer Society in the name of Marvin E. Wilkins.

Marvin Edwin Wilkins, a 52 year resident of Dumfries, Virginia, died at INOVA Fairfax Hospital of complications from cancer treatment on October 3, 2019. Marvin was 82 years old at the time of his passing. He is survived by his two sons, Michael,... View Obituary & Service Information

The family of Marvin Edwin Wilkins created this Life Tributes page to make it easy to share your memories.

Send flowers to the Wilkins family.