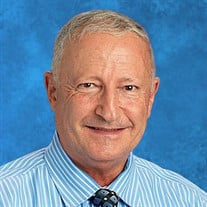 Martin Romeo, 69, of Woodbridge, VA, passed away at home on Friday, February 19, 2021. He was born on November 4, 1951 to Salvatore and Catherine Romeo in Patchogue, Long Island, NY. After completing his BS in Electrical Engineering at MIT and an MS and Engineer’s Degree in Electrical Engineering from the Navy Postgraduate School, Martin embarked on a 21-year career for the Navy, serving as a Naval Engineering Duty Officer. He worked on a variety of projects ranging from ships and satellites to computer hardware and other electronic systems. He was awarded the Defense Meritorious Service Medal in 1982 for work on the development of the fax machine and computer systems for the Internet and received the Navy Meritorious Service Medals in 1987 and 1994. He then went through George Washington University’s Teaching Program to become a teacher. For the last 26 years, he served as a physics teacher at Madison High School in Vienna, VA. His teaching motto was, “You are not what you know. You are what you can figure out for yourself.” He was deeply devoted to his students and loved his Madison community. Besides being a well-loved and highly engaging physics teacher and sponsor for the chess club, swing club, and ping pong club (among others), he enjoyed orchestrating the Science Fair, serenading students for their birthdays and singing “Newtonian” Carols (in honor of the birth of Isaac Newton on December 25), speaking at graduation, performing in flash mob dances, and proudly leading the freshmen classes in the Warhawk Fight Song. Martin was a faithful member of Saint Elizabeth Ann Seton Catholic Church (SEAS), where he served as a cantor and sang in the vigil choir for many years. In his free time, he pursued a variety of diverse interests including gardening, ballroom dancing, bowling, table tennis, chess, and playing the accordion. He also enjoyed the science fiction genre and was a huge Star Trek: The Next Generation fan. Martin is preceded in death by his mother and father, oldest sister, Mary, and his loving wife, Gloria. He is survived by his daughter, Josephine, and his son-in-law, Matthew, as well as his youngest sister, Maureen. The funeral is scheduled for 11am on Monday, March 1, 2021 at Saint Elizabeth Ann Seton Catholic Church, 12807 Valleywood Drive, Lake Ridge, VA 22192. For those unable to travel or come to the funeral, the funeral mass will be livestreamed. https://vimeo.com/event/735661/4aa9bb2e58 In lieu of flowers, donations can be made to the Warhawk Foundation in his memory. https://www.warhawksf.org/

Martin Romeo, 69, of Woodbridge, VA, passed away at home on Friday, February 19, 2021. He was born on November 4, 1951 to Salvatore and Catherine Romeo in Patchogue, Long Island, NY. After completing his BS in Electrical Engineering at... View Obituary & Service Information

The family of Martin Romeo created this Life Tributes page to make it easy to share your memories.

Martin Romeo, 69, of Woodbridge, VA, passed away at home on Friday,...

Send flowers to the Romeo family.