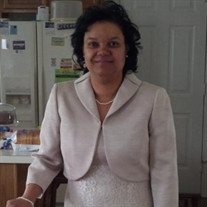 Marian Annette Lomax –Cole was born July 14, 1966 at Mary Washington Hospital in Fredericksburg, VA, to the late William Henry Lomax and Marion Mae Lomax. On Friday August 7, 2020 Annette passed away suddenly unto the Lord at her residence in Woodbridge, VA at age 54. Annette attended Arlington County Public Schools, and after graduating from high school she began her working career with General Services Administration (GSA) where she worked for over 33 years. She attended and graduated from Strayer College to excel in her career. Annette’s current position was an Information Technology Specialist. She was a diligent worker and an exceptional team member. She joined and was baptized at Ebenezer Baptist Church, in Supply Virginia at an early age. Later in her adult life she became a member of Repentance by Faith Church of God Apostolic in Manassas, VA. Annette receive the gift of the Holy Ghost, and became spiritually perfected in her walk of faith. She was enthusiastic, joyful, and diligent in obtaining the word of God. Annette attended the H.E. Wood Bible Institute and Theological Seminary Bible College where she received a diploma, and associate degree in biblical studies. She was a faithful member in the body of Christ as she served as a wonderful Sunday school teacher, secretary, president, and leader of the church technology ministry. Annette was ordained as a minster in November 2014 and received the Lord’s call for her as an evangelist. Annette grew up in a loving family, and enjoyed all family gatherings. She was always cheerful, a motivator, very organized, and enjoyed learning new technology, playing puzzle game, crocheting, journaling, and she could make the best carrot cake. She treasured her relationships with family and friends, but most of all she enjoyed being a mother to Ricky, and a grandmother to her two wonderful grandchildren. On February 8, 1997, Annette was married to Michael Cole. God blessed their marriage for over 20 years until his death. She was preceded in death by her father, three brothers Deacon Larry William, Frederick Henry, Robert Louis Lomax and, one sister Frannie Deanna Lomax. Annette is survived by her loving mother, Marion Mae Lomax of Arlington, VA; a loving son Richard (Ricky) Hayes III (Aleshia) of Orange County, VA from her first marriage to Richard B. Hayes, Jr.; stepdaughter Vonetta Cole of Woodbridge, VA; two grandchildren Travis Hayes grandson, and Aaliyah Hayes granddaughter, one goddaughter Zora Alyssa Lomax ( great niece); one sister Prophetess Jacqueline Lomax of Arlington, VA; sister- in –laws, Reverend Zora Lomax of Woodbridge, VA, Stephanie Hayes, of Arlington, VA, Robin Johnson (Terry) of Somerset, KY; mother –in-law Pearl Daniels; two brother- n-laws, Jerome Cole, (Mary) of Moss Point, MS, Steven Cole(Leslie) of Manassas, VA; a special brother Gilbert McCormick, Jr.; four uncles Louis Green, Russell Lomax, Charles Lomax, and Robert Lomax of Hustle, VA.; one niece Renita Lomax; two nephews Larry D. Lomax, and Jamal Lomax; and a host of family and friends.

The family of Marian Annette Lomax-Cole created this Life Tributes page to make it easy to share your memories.

Send flowers to the Lomax-Cole family.