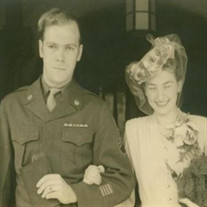 Maria Charlotta Fasold, passed away peacefully on July 14, 2020 in her home at Heartfields of Fredericksburg. Lovingly known as Mom and Mom-Mom, she is survived by her beloved son Robert Fasold and her daughter Linda Worrilow. She is also survived by her beloved grandchildren, Justin (Kendall) and Brian (Melissa) Worrilow, Gregory and Victoria Fasold, and great-grandchildren, Carter, Greyson, Madison and Emma Worrilow. In addition, she is survived by her beloved family in Belgium. Maria was born on October 3, 1926 in Antwerp, Belgium and her given name was Maria Charlotta Eugenie Jeanne Respelier. Maria was born to Anna Van Dyck and Oscar Respelier. She is preceded in death by her parents, a sister Louise and a brother John who passed before she was born. Maria is also preceded in death by her beloved husband Donald Evert Fasold. Our mother was born with a strength that saw her through life. She grew up during World War II in Antwerp. At times, she shared with her family the many horror stories of living during a war. It was common for the Nazi’s to search their home with guns drawn. As their only means of transportation, she and her sister rode their bicycles in town to the sound of bombs exploding around them. Mom shared stories about how her many Jewish friends would simply disappear, never to be seen again. Many of the horror’s she experienced carried with her into her adult life in the form of nightmares with air raid sirens sounding in her mind. Her father was not always around, and she was mainly raised with her sister by their beloved mother. Because of the war, she attended school only through the 8th grade. Despite her limited formal education, she spoke both Flemish and English, and always had a thirst to learn and better herself. Maria was 19 years old when her brother-in-law Stan brought home a friend for dinner. That friend was Donald Fasold, an American Army Sergeant. They fell in love and married in Brussels following the war, with a short honeymoon in Paris. Donald was then sent back to America with his troops and Maria was one of many War Brides on a ship to America. It was not easy for her, she barely knew English, she said goodbye to a family she loved, but she worked hard to make it work. That was a love that lasted 56 years until our dad passed in 2002. Through their married life they stayed in close touch with Mom’s family. Mom and Dad made several trips to Belgium and her mother and family came to see them too. Many, many letters went back and forth. Two years ago, her great niece Louise and her husband came to America for the first time, knowing she was getting older and wanting to see her. It was special for all of us. We heard lots of stories about our family so far away. It was wonderful, it was a gift. Maria survived 4 cancers and fought them all with the same courage and determination she demonstrated throughout her life. She will be laid to rest next to her husband with a private service of immediate family. In lieu of flowers, if you would like to make a donation in honor of her memory, please send or do online to: Mary Washington Hospice ALSAC/St. Jude Children’s Research Hosp. 2300 Fall Hill Avenue, Suite 401 or Memorial Giving Fredericksburg, VA 22401 501 St. Jude Place Memphis, TN 38105

Maria Charlotta Fasold, passed away peacefully on July 14, 2020 in her home at Heartfields of Fredericksburg. Lovingly known as Mom and Mom-Mom, she is survived by her beloved son Robert Fasold and her daughter Linda Worrilow. She is also survived... View Obituary & Service Information

The family of Maria Charlotta Fasold created this Life Tributes page to make it easy to share your memories.

Send flowers to the Fasold family.