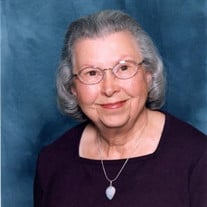 Lula Motley Yusko, 96, a resident of the Memory Care Unit of the Tribute at the Glen died on December 18, 2018. She was preceded in death by her husband, Stanley Yusko; her son, Dr. Stanley Clark Owen; and 7 of her 8 brothers and sisters. Born on April 9, 1922 in Shockoe, Virginia, she was the daughter of John Henry Motley and Elizabeth Catherine Owen. She is survived by her daughter Patricia Hicks, Patricia’s husband Stan, their children and grandchildren, by her grandson Edward Owen, the son of the late Dr. Stanley Owen, Edward’s wife Shantelle, and Samuel Motley, Lula’s only surviving sibling. Lula was raised in the greater Danville, Virginia area and was a charter member of the Blairs Baptist Church. She graduated second in her class from Dan River High School and was awarded the H.E. Gosney medal for literary excellence. When her granddaughter, Melinda, was selected to speak at Melinda’s college graduation, Lula decided it was time to pass along her medal to another deserving graduate. During WWII Lula received employment at Fort Lee working as a switchboard operator where she met her future husband, Staff Sergeant Stanley Yusko. They were married on April 10, 1943. Lula and her husband eventually settled in Richmond, Virginia where they raised their family. While in Richmond, Lula worked for Thalhimers Department Store and Reynolds Metals. She was an active member of Ridge Baptist Church, an avid member of her bridge group for 30+ years and a member of the Farmington Garden Club. Lula continued to live in Richmond after the death of her husband in August of 1995. Then in 2002, when Lula was 80 years old, she was injured in an automobile accident which resulted in her moving to Woodbridge, Virginia to live with her daughter. There, Lula enjoyed vacationing with her daughter and son-in-law at various scenic spots around the country. In her nineties, Lula had several falls that left her largely wheelchair bound. This necessitated her taking up residence at the memory care unit of Tribute at the Glen. A Memorial Service honoring the life of Mrs. Yusko will be held in Danville, Virginia after the holidays. In lieu of flowers, memorial contributions in memory of Lula may be made to Operation Smile, which aims to give life-changing surgeries to children in need, or another charity of your choice.

Lula Motley Yusko, 96, a resident of the Memory Care Unit of the Tribute at the Glen died on December 18, 2018. She was preceded in death by her husband, Stanley Yusko; her son, Dr. Stanley Clark Owen; and 7 of her 8 brothers and sisters.... View Obituary & Service Information

The family of Lula M. Yusko created this Life Tributes page to make it easy to share your memories.

Lula Motley Yusko, 96, a resident of the Memory Care Unit of...

Send flowers to the Yusko family.