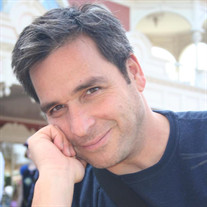 Luis Alberto (Beto) Araneda Aguirre (1964-2021) After an eight-year heroic battle with cancer, Luis Alberto (Beto) Araneda Aguirre left this world on June 22, 2021. Beto was born in Santiago, Chile on January 28, 1964, to Arnoldo Araneda Aravena and Maria Angelica Araneda Aguirre. From his youth, Beto had 3 dreams: come to the United States, to learn English, and to marry Olivia Newton John. He always said he accomplished the American dream by fulfilling all three of those goals and exceeded his expectations by marrying his beloved wife Tammy, instead of Olivia Newton John. His dream was surpassed with the arrival of his children, Phillip, Amanda, and Daniela. Over time Beto went on to earn a high security clearance and had a successful career as a software trainer for government contractors. Beto was a fierce and avid fan of soccer, especially the English Premier League and international competition. His family is very grateful to the physicians who attended him throughout his illness and would like to make special acknowledgement of Dr. Andrew Akman, an Interventional Radiologist at Suburban Hospital, who was instrumental in providing him with five additional beautiful years. Beto is survived by his beloved wife Tammy, son Phillip, daughters Amanda and Daniela; his brother Juan Carlos (Carola); his sisters Maria, Ana, and Paula; brothers-in-law Jack Tice and Mark Vohwinkel; nieces and nephews: Stefanie, Andres, Francisca, Felipe, Andrea, Camille, Diego, Joaquin, Agustin, Amber, Autumn, and Gavin. He was always grateful for, and appreciated the company of, his very close groups of friends whom he treated like family and loved unconditionally. Services will be private. The following zoom link has been made available for individuals to join the service remotely (July 10th at 6:30pm EST): https://us02web.zoom.us/j/82843844740 The family is requesting that donations be made to a memorial fund in honor of Beto at Suburban hospital - https://donate.suburbanhospital.org/albertoaraneda The ‘Alberto Araneda Fund for Interventional Radiology at Suburban Hospital’, has been created with the purpose to help others on their colon cancer journey through the works of Dr. Andrew Akman and his Interventional Radiology Department at Suburban Hospital.

The family of Luis Alberto Araneda created this Life Tributes page to make it easy to share your memories.