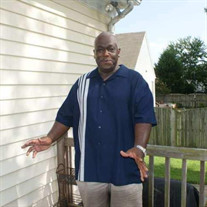 Mr. Leonard Jitahadi Vickers, 68, of Woodbridge, Virginia departed this life April 11, 2021 at his residence. Born November 2, 1953 in East Orange, New Jersey, he was the son of the late James A. Vickers and Catherine B. Andrews. He was last employed as Operations Program Manager at US Army Corps, Ft. Belvoir, Virginia. He graduated with honors and received his Master's Degree of science and network security from Capitol College of Maryland in 2004. He was a coach, referee, enjoyed sports, was self-taught to play many instruments such as the saxophone and guitar, he indulged in film, comics, and learning new skill-sets in his past time. He encouraged continued learning to everyone around him as he strived throughout his life to do the same. He was preceded in death by his Grandmother, Thelma Andrews, both of his parents and his younger brother Kenny Vickers, all of New Jersey. Mr. Vickers is survived by his wife Susian E. Vickers; one son Cheo B. Vickers (Theresa) of Woodbridge, Virginia; one daughter Malaika V.C. Vickers (Michael) of Woodbridge, Va, one step-son James H. Jones (Sophia) of Huntsville, Alabama. One sister Lenthia Renee Vickers aka Faheema, of New Jersey; four brothers, Darryl Vickers, James E. Evans, Jerrell E. Evans, and John E. Evans, all of New Jersey; five grandchildren, Lauren, Bryant, Alex, Milah & Laken and a host of other relatives and friends. An interment service with military honors will be held at Quantico National Cemetery on Friday, May 21, 2021 at 2:30 p.m. All those who wish to attend should arrive 15 minutes prior to the scheduled service time and meet in the designated cortege lane. Arrangements by Miller Funeral Home.

Mr. Leonard Jitahadi Vickers, 68, of Woodbridge, Virginia departed this life April 11, 2021 at his residence. Born November 2, 1953 in East Orange, New Jersey, he was the son of the late James A. Vickers and Catherine B. Andrews. He was last... View Obituary & Service Information

The family of Leonard J. Vickers created this Life Tributes page to make it easy to share your memories.

Send flowers to the Vickers family.