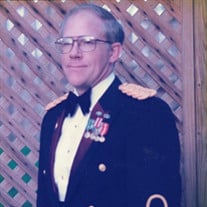 Lt. Col. (U.S Army ret.) Larry W. Wild passed away 10 July 2021 at UNC Cancer Hospital in Chapel Hill, North Carolina; he was just 70 years old. His quiet, steadfast resolve in facing life’s challenges head-on never wavered during his courageous battle with leukemia. Despite the challenges, he remained a hero to all who knew him and stayed very strong until the end. Larry will be laid to rest in Arlington National Cemetery in a military ceremony November 9, 2021 at 9AM. In lieu of flowers please send donations to two charities that were dear to Larry’s heart: Hope for the Warriors (https://www.hopeforthewarriors.org/) or The Leukemia & Lymphoma Society (https://www.lls.org/). Larry is survived by his wife, Janice Wild and their two children, Jamé Affeldt and Todd Affeldt (spouse), and Jason Wild and Dréa Wild (spouse). Larry was the younger of two siblings to Dr. Jack and Anna Wild and is survived by his older sister, Lynda Chappell. Larry’s legacy will also continue to live on in his four ridiculously amazing granddaughters, Morgan Affeldt, Madison Affeldt, Rylee Affeldt, and Zoë Wild. Larry was born 27 May 1951 in Lawrence, Kansas, while his father Jack Wild completed his Ph.D. in physics at the University of Kansas. Larry then traveled the United States with his parents before settling in Olney, Maryland, in 1963, where he completed secondary school at Sherwood High in Montgomery County Maryland in 1969. Larry played defensive line for the Sherwood football team, and the fact he stood 5’6”and weighed barely 180 lbs is all you need to know about his focused determination and desire to compete. In the fall of 1969, Larry matriculated to Western Maryland College (now McDaniel College) in West-minster, Maryland, to major in Biology. Additionally, despite the unpopularity of the Vietnam War, Larry took it upon himself to volunteer for a commission from the Reserve Officer Training Corps and became a Second Lieutenant in the United States Army in 1973. Following his commission he was assigned to Fort Sam Houston, Texas, for training in the Army Medical Service Corps. And then…it was at Fort Sam Houston in September of 1973 where Larry put eyes on the love of his life, Janice, while she leaned against her metallic-copper Mustang wearing baby blue bell-bottoms and a white top; a First Lieutenant training to be an Army nurse at the same post. They later met in the bachelor officer’s quarters kitchen and got to know one another over a delightful meal of Hamburger Helper. Larry convinced Jan (or was it the other way around?) to swap orders with her friend, so they could be stationed together at Ft. Lewis, Washington, and were subsequently married three months later on 3 December 1973. Two years later, Jamé was born at Ft Lewis on 8 December 1975, shortly before they moved to Ft Bragg, North Carolina, where Jason was born later on 6 September 1978. Larry served in the Army for 23 years, and his commitment took him to Georgia, Texas, Virginia, South Korea, and the National Capital Region. He earned two Master’s Degrees, graduated from the US Army Command and General Staff College, and was awarded two Legions of Merit for his actions. Larry’s favorite job in the Army was as a Company Commander in the 24th Infantry Division, and his greatest accomplishment was designing and developing a new paradigm in field hospitals and medicine. Larry’s final assignment took him to the DC area where he served at the Pentagon with the Office of the Army Surgeon General in addition to being temporarily assigned to US Army Forces Command Headquarters during Desert Storm. Larry’s hilarious stories of a career spent serving his country are too many to mention here, but are recounted with pride amongst all of his family and friends. Following his retirement from the Army, Larry continued to work for the U.S. Government in various contractor and civilian positions before he retired from the work force for good in 2013. For a decade before his retirement, he and Jan designed a home to be built in River Landing, a golf course community in Wallace, North Carolina. It was here that they developed close relationships with neighbors, hosted family and friends, and Larry discovered a love for golf, pickle ball, volunteering in the community with Habitat for Humanity, and helping his neighbors recover from Hurricane Florence in the summer of 2018. Together, Larry and Jan made a wonderful life for themselves over the course of their 48 years of marriage.

The family of Larry W. Wild created this Life Tributes page to make it easy to share your memories.

Send flowers to the Wild family.