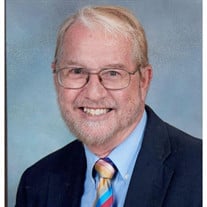 Kenneth Latta Baucom August 7, 1939 - November 27, 2021 Kenneth Latta Baucom went to his eternal home on November 27, 2021, after a year of declining health. Ken was born August 7, 1939 in Monroe, North Carolina. Ever a scholar, he completed Bachelor’s and Master’s degrees in English and Classics at the University of North Carolina, Chapel Hill. He then completed a PhD in Linguistics at Hartford Seminary in Virginia. At various times he taught at universities and colleges, such as the University of Georgia, Radford University and the Citadel. While studying French in Switzerland, he met the love of his life, Henrietta Unrau of Kleefeld, Manitoba. They married in Canada in 1962. They lived in several places in the U.S. before answering a call to serve the United Methodist Church in Africa. Ken was involved in adult literacy and training for many years in Namibia, South Africa, Angola and other African countries. He worked with non-profit organizations, as well as large companies such as the Anglo-American Corporation. He set up literacy and training programs, trained teachers, wrote training manuals and founded a large private adult education company in Africa. His work in literacy impacted thousands of people in sub-Saharan Africa. After hearing a call to change focus, Ken and Henrietta founded a Christian retreat center in their beloved Magaliesberg mountains near Johannesburg. Their work there reached multiple churches and individuals, and included Ken’s being a spiritual advisor to pastors and church leaders. He was a consistent lay preacher in Methodist churches, and at one point planted an international church in Pretoria. Ken’s last change of focus was to K-12 education. He founded an American-curriculum International school in Pretoria, South Africa -- the North American International School (NAIS.) He ran the school for 17 years, seeing it grow and evolve in the international community it served. His beloved Henrietta died in 2017, and he retired the following year, returning to his second home in Haines City, Florida. His legacy is spread around the world. Kenneth was predeceased by his wife Henrietta, and son Latta. He is survived by his daughter Christianne and son Ian (Wendy), his daughter-in-law Gina, thirteen grandchildren and four great-grandchildren; brothers Bernard (Janice) and Donald (Linda) and a sister Llew (Bob). Contributions in memory of Kenneth can be made to the Mennonite Central Committee's Christmas Giving efforts at https://mcc.org/christmas#!

The family of Kenneth Latta Baucom created this Life Tributes page to make it easy to share your memories.

Send flowers to the Baucom family.