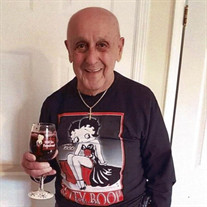 Joseph "Pops" Marmo, 93, of Woodbridge, VA, died peacefully at home on May 15, 2020. He moved to Virginia in 2011 from Toms River, NJ. He raised his family in Lakewood, NJ. He was a Navy Veteran, serving in World War II from 1945-1947. Joe was an active member of the Howell Elks Lodge 2515, where he served 1 term as Exalter Ruler and became a honorary life member. He also was a lifetime member of VFW post 4715 in Point Pleasant, NJ and a member of the Italian American Club. He retired from Modern Gas in Lakewood, NJ as a Propane Service Technician. He married the love of his life, Frances "Toot" Graziano in 1954 at St. Mary of the Lake Church in Lakewood. He was preceded in death by his wife, parents Charlie Marmo and Delia "Nellie" Cestaro Marmo, siblings Tomasina "Mae" Tallarida, Agnes Burke and Nicholas Marmo. His family brought joy to his life. He is survived by a daughter Joanne McCoubrey and son-in-law Rob McCoubrey of Woodbridge, VA, a daughter Frances "Sis" Cordero of Fairfax, VA and a son Joseph Marmo of New Albany, OH, six grandchildren, Nicholas Cordero, Anthony Cordero, Giovanna Cordero Bowden, Robby McCoubrey, Carlo Marmo, Luca Marmo, and 2 great grandchildren Bane Cordero and Quinn Cordero. Pops was loved by many and will be missed. Services TBD.

The family of Joseph Marmo created this Life Tributes page to make it easy to share your memories.

Send flowers to the Marmo family.