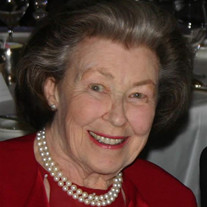 On February 21, 2019, Jean Hearn Sniffin passed peacefully into the presence of her Lord and Savior. In recent years, she and her late husband, Major General Charles R. “Peter” Sniffin, USA (Ret.), were residents of Westminster at Lake Ridge in Woodbridge, VA. Jean was born on December 15, 1923 in Charlotte, NC. As the daughter of a soldier, Major General Thomas G. Hearn, USA, (Ret.) and his wife Charlotte Jadwin Hearn, and the granddaughter of a soldier, Lieutenant General Edgar Jadwin, USA, (Ret.) and his wife Jean Laubach Jadwin, she developed an enduring appreciation for the special nature of America, its Army, and the importance of service. Following graduation from Stephens College in Columbia, MO, and work at Macy’s department store in New York City, Jean eventually travelled to visit family friends stationed at Ft. Benning, GA. There in the Officer’s Club, a handsome young officer asked her to dance. They were married on November 26, 1948, in the Old Post Chapel at Ft. Myer, VA. What followed, over the next 69-plus years, was the journey of a lifetime. Seeing the world through an Army lens, Jean and Peter sought to serve God and country, nurture their children, care for unit soldiers and families, and make each destination along their career path better through their investment of time and energy. Early in their marriage, overseas duty assignments included Cold War era Bulgaria and Austria. Other locations, interspersed with Peter’s deployments to Korea and Vietnam, included Ft. Benning, GA; Palo Alto, CA; Carlisle Barracks, PA; West Germany and multiple assignments in Washington, DC. Throughout Peter’s career, Jean devoted herself to each new opportunity. In the late 1950s, she volunteered as a uniformed docent at the Washington National Cathedral. During later assignments, she served as a fundraiser for the Army Distaff Foundation. Jean also honored grieving military families as an “Arlington Lady,” representing the Chief of Staff of the U.S. Army, at funerals in Arlington National Cemetery. These roles, and countless others at the church, community, or unit level, characterized her caring, selfless service as an Army wife and mother. In the summer of 1981, following a final assignment at the Presidio of San Francisco, CA, Jean and Peter settled in historic Fredericksburg, VA. Over the next 33 years, she endeavored to enrich the many lives and organizations that benefited from her care and stewardship. During varying periods, Jean served in a variety of positions with the Daughters of the American Revolution: National Vice Chairman for American Heritage, State Chairman for National Defense, State Chairman for Kenmore, Chapter Regent for the Washington Lewis Chapter, and as a member of the DAR Congressional Committee. She also supported the greater Fredericksburg community as a buyer for the Mary Washington House gift shop, a supporter and organizer of the Fredericksburg Children’s Museum, and an active member of the Germanna Volksport Association. Jean was also a faithful member of St. George’s Episcopal Church and her neighborhood ladies Bible study group. She is survived by her three sons and families: COL Charles T. “Chip” Sniffin, USA (Ret.), his wife Erin, and their married sons Charles Andrew (Stephanie) and great grandson Charles Liam, and James Edward (Rhiannon); Chaplain (COL) Peter R. Sniffin, USA, his wife Rose Marie, and daughters Olivia and Amelia; and Edgar D. “Ted” Sniffin, his wife Ann, and children Christopher and Rebecca Ann. All the Sniffins extend their sincerest thanks to the staff, care givers, and residents of Westminster at Lake Ridge for the diligent attention and kind spirit they extended to Jean throughout her years in their warm and friendly community. A memorial service will be held at St. George’s Episcopal Church in Fredericksburg, VA on March 15, 2019 at 11 a.m. A funeral service will be held at the Old Post Chapel, Ft. Myer, VA. Interment will follow in Arlington National Cemetery. More information will be forth coming. In lieu of flowers, memorial contributions may be made to any of the following organizations: The Daughters of the American Revolution (www.dar.org/giving) The Army War College Foundation (www.usawc.org) The Washington Heritage Museums (www.washingtonheritagemuseums.org) Officers’ Christian Fellowship (ocfusa.org)

On February 21, 2019, Jean Hearn Sniffin passed peacefully into the presence of her Lord and Savior. In recent years, she and her late husband, Major General Charles R. &#8220;Peter&#8221; Sniffin, USA (Ret.), were residents of Westminster... View Obituary & Service Information

The family of Jean Hearn Sniffin created this Life Tributes page to make it easy to share your memories.

Send flowers to the Sniffin family.