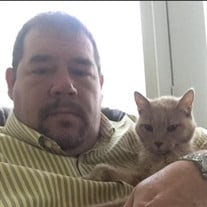 Jay Allen Neustel, age 54, of Woodbridge, VA died on July 26, 2020 at Rivergate Apartments, Woodbridge, Virginia. Jay was born March 16, 1966 in Bismarck, North Dakota to William Willey Neustel and Karen Ann Kemnitz. He spent much of his childhood there and was proud to call North Dakota home. It was there he learned the values that were the foundation of the man he became. Jay graduated from Oak Grove Lutheran High School in Los Angeles, California. After graduation, he enlisted in the U.S. Army and was stationed at Fort Myer, Virginia. Before separating from the service, Jay earned the rank of Specialist (E-4) and was awarded the Army Commendation Medal, Good Conduct Medal, and Army Service Ribbon. After serving in the military, Jay worked as a U.S. Government contractor in private industry. While assigned in Miami, Florida, he completed his college education, graduating with honors in the top 5% of his class. Jay began his 30 year career with the U.S. Government as a Security Specialist for the Department of State. His current position was Director, Secure Logistics Division, U.S. Department of State. Jay was recently selected for a promotion and was preparing to move to Antwerp, Belgium. Jay was a Boy Scout Leader; he loved boats, cats, photography, and playing the guitar. He enjoyed traveling, ice cream, and history. He had an ability to remember obscure facts, which made him great company while watching Jeopardy. Jay had a ready smile and goodhearted nature that endeared him to those who knew him. One of his favorite songs was “Simple Man” by Lynyrd Skynyrd because it reminded him of his mother and the important things in life. His kindness, honesty, and humor touched many lives, personally and professionally. He was a good friend who made it a point to say “I love you.” He is dearly missed. Jay is survived by his mother, Karen, and her husband, Larry Lyson; his brother, William Neustel, and his children, Wiley and Rebecca; his sister, Tiffany Norton, her husband, Dennis, and children, Tanner, Trevor, and JaeAnna; his uncles, Michael, David, and William Kemnitz, and Robert Neustel, his aunt, Connie Wolf, and their respective families, in addition to numerous cousins and extended family. Due to the current pandemic, services will be private. The family has requested that in lieu of flowers memorial gifts may be made to a charity of your choice.

The family of Jay Allen Neustel created this Life Tributes page to make it easy to share your memories.