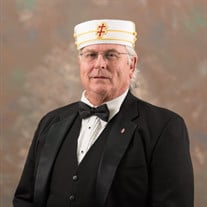 James “Jim” A. Newcomer, Jr., 65, of Woodbridge, Virginia, passed away unexpectedly on May 14, 2020 at his home. He was born in Johnstown, Pennsylvania and graduated from Greater Johnstown Area Vocational Technical School in 1972. He was a United States Marine Corps veteran and worked for the National Geospatial-Intelligence Agency for 35 years until his retirement in 2017. He was preceded in death by his parents, Geraldine P. Newcomer and James A. Newcomer, Sr., as well as two brothers, Clifford Shaffer and Robert Webb, Jr. He is survived by his wife of 45 years, Marie; his daughter Angela Newcomer, his son Jason Newcomer, and Jason’s fianc?e, Jacqueline Ferrell. He is also survived by his sister, Marianna Rummell, and brother, John Newcomer. Jim was actively involved in several Masonic organizations. He was a member of John A. LeJeune Lodge #350 A.F. & A.M., Quantico, Virginia, where he served as Worshipful Master in 1995 and 2008. He was District Deputy Grand Master in 2006. He served as the Lodge Treasurer for almost 25 years. Jim joined Alexandria Scottish Rite in 1996. He was awarded the Knight Commander Court of Honor (KCCH) in 2009 and was the Degree Master of the 30th Degree for over 10 years. In 2017, he was honored to receive the Scottish Rite 33rd degree. He became a Kena Shriner in 1998. Since his retirement, he has enjoyed transporting patients and their families to the Philadelphia Shriners Hospital. Jim joined Quantico Chapter #44, National Sojourners in 2008. He served as President twice and spearheaded the JROTC awards program and the Sojourners Christmas Food Baskets - community outreach program. Jim joined Samuel Nicholas Camp, Heroes of ’76 in 2008 and served as Camp Commander since 2011. He also belonged to American Legion Post #28 in Triangle, Virginia. Jim was a 25-year member of the Order of the Eastern Star (OES). He served as Worthy Patron of Occoquan Chapter #59 OES in 1996-1997. After affiliating with Calvin A. Lloyd #81 OES, he served as Worthy Patron five times. In lieu of flowers, donations may be made to any of the following charities in his memory: 1) Quantico Chapter #44 National Sojourners, c/o Bennett Hart, 9638 Park Street, Manassas VA 20110 2) Scottish Rite Foundation of Virginia, c/o Leonard Rowe, 4841 Hickory Ridge Court, Roanoke VA 24018 3) Shriners Hospital – Honolulu, Attn: Lori Suan, Development, 1310 Punahou Street, Honolulu HI 96826-1099 *Please mark Patient Transportation Fund in memo line* Services will be held at Miller Funeral Home on Sunday, July 26, 2020. Visitation will be 2-4 p.m. and 6-9 p.m. Masonic services will be at 7 p.m., followed by an OES Service, and a Celebration of Life. Burial will be held on Monday, July 27, 2020 at 1 p.m. at Quantico National Cemetery.

James “Jim” A. Newcomer, Jr., 65, of Woodbridge, Virginia, passed away unexpectedly on May 14, 2020 at his home. He was born in Johnstown, Pennsylvania and graduated from Greater Johnstown Area Vocational Technical School in 1972. He was a United... View Obituary & Service Information

The family of James A. Newcomer Jr. created this Life Tributes page to make it easy to share your memories.

Send flowers to the Newcomer family.