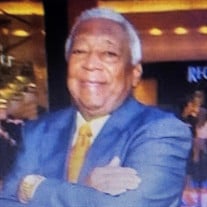 James (Jim) Gilmore of Woodbridge, VA died January 12, 2022 at Sentara Hospital, Woodbridge after a brief illness. He was born in Halifax County, VA to Armistead and Irene Hamlett Gilmore. In 1950 he entered Virginia State University, where he majored in Agriculture Education. He graduated in 1954 and was commissioned into the U.S. Army, Quartermaster Corps, as a 2nd Lieutenant. He had duty assignments in Germany, South Korea, Okinawa, Japan and Vietnam. Upon his return to Ft. Lee, VA from South Korea in May 1963, he met Winifred (Winnie) Jordan who was employed at Ft. Lee. They were married in August 1967 and had two daughters, Erika and Melissa. He was predeceased by his parents and three sisters, Esther Davis, Dorothy Jackson, and Ophelia Hamlett, and two brothers, John Wesley and Hollis. Jim retired from military active duty, as a Lieutenant Colonel, in September 1974. Upon his retirement he assumed the role of “Domestic Engineer”, overseeing the care of his two daughters while Winnie returned to the workforce. He was very active with their school activities, e.g., PTA, schoolbook review committee, girl scout activities, etc. He later built a log house on the farm, where he enjoyed escaping, chopping wood, driving his truck, and helping family and friends. He will be dearly missed by his wife, daughters, in-laws, nieces, grand nieces, nephews, grandnephews, cousins, and friends. The family will receive friends on Tuesday, January 25, 2022 from 4-8:00 p.m. at Miller Funeral Home, 3200 Golansky Blvd., Woodbridge, VA 22192. A funeral service will be held on Wednesday, January 26, 2022 at 11:00 a.m. at St. Margaret's Episcopal Church, 5290 Saratoga Lane, Woodbridge, VA 22193. Interment will follow at Quantico National Cemetery with military honors.

James (Jim) Gilmore of Woodbridge, VA died January 12, 2022 at Sentara Hospital, Woodbridge after a brief illness. He was born in Halifax County, VA to Armistead and Irene Hamlett Gilmore. In 1950 he entered Virginia State University, where... View Obituary & Service Information

The family of James Hucles Gilmore created this Life Tributes page to make it easy to share your memories.

Send flowers to the Gilmore family.