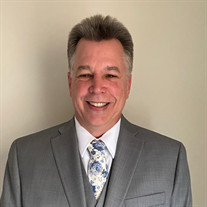 James Feindt passed away on January 31, 2021 at the age of 62, in his hometown of Woodbridge, VA. He was greatly loved by his friends and family, whom he put before all things. He worked for Sodexo as the Senior Unit Clerical and was part of the larger team responsible for providing food services to the students, faculty, and visitors of George Mason University. It was there that he met the love of his life, Jeanie, who he eventually married on July 21, 2007, and with whom he spent his remaining years—his best years. When he wasn’t spending time with his friends and family, he could be found fishing Lake Montclair, where he shared a house with Jeanie. If that wasn’t an option, he was perfectly content to park it on the couch and watch sports. A lifelong sports fan, he loved watching NASCAR, football (American and European), baseball, and basketball. In fact, he’d watch just about any competitive sport—competitive being the operative word. Any sort of game was an invitation for him to prove he was better than you. If he asked you, “do you want to play ping pong,” good luck with that. Jeopardy? Forget it. Croquet? Have fun finding your ball in the woods. Let his children win at monopoly? Not a chance. Of course, it was always in good fun, and he’d share a tasty beverage with you afterward. He was a good man, and he will be greatly missed by all who knew him. James was preceded in death by his father, Lawrence Feindt, and his brothers Frank Feindt and Larry Feindt. He is survived by his wife, Jeanie Feindt; his children, Jeremiah Feindt, Jacqueline Salzer, Vic Manni, and Sarah Houtz; his mother, Therese Feindt; his siblings John Feindt, Patrick Feindt, Michael Feindt, Sue Taylor, and Christopher Feindt; and his many grandchildren. Visitation services are scheduled for Friday, February 5, 2021 from 5PM to 9PM at Miller Funeral Home in Woodbridge, VA. In lieu of flowers, the family ask that you send donations to the Wildlife Foundation of Virginia and/or the American Heart Association.

James Feindt passed away on January 31, 2021 at the age of 62, in his hometown of Woodbridge, VA. He was greatly loved by his friends and family, whom he put before all things. He worked for Sodexo as the Senior Unit Clerical and was part... View Obituary & Service Information

The family of James Feindt created this Life Tributes page to make it easy to share your memories.

Send flowers to the Feindt family.