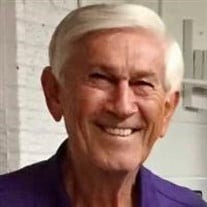 Jack Conrad Inge of Woodbridge, VA went to be with the Lord & Savior on August 30, 2021 at Inova Fairfax Hospital surrounded by his family. Jack was born on March 19, 1941 and grew up in Chase City, Virginia. He was the son of James Conrad & Elizabeth. Jack graduated from Bluestone High School, class of 1958. Following graduation, he joined the Army National Guard. He worked for At&t and founded Quality Tire in 1986. He was a true entrepreneur that built a business that still carries on today, 3 generations strong. Jack came to know the Lord in 1972. He was a loving and faithful servant. He enjoyed sharing the gospel with others. He helped establish Sovereign Grace Baptist Church 45 years ago where he was a member and served as a Deacon for over 40 years. His favorite bible verse is Proverbs 3:5-6. Jack loved to play golf. He was an avid golfer for over 60 years. After retirement, his grandchildren used to say every morning he played golf he was leaving for work at his full-time job. Jack is survived by his wife, Ann H. Inge, his eldest son Jeffrey (Julie), middle son Brian (Kimberly), youngest son Kevin (Jennifer), his grandchildren Cori (Jacob), Amber (Thomas), Gavin, Brandon, Casey, Madison, his great-grandchild Noelle, his sister Doris Nixon from Greensboro, NC, his brother Robert Inge (Virginia) from Appomattox, VA, his niece Cheri Ellixson from Greensboro, NC, and Josh Little (adopted son). He is preceded in death by his father James Conrad Inge and his mother Elizabeth Inge (Champion). Proverbs 3:5-6 KJV Trust in the LORD with all thine heart; And lean not unto thine own understanding. In all thy ways acknowledge him, And he shall direct thy paths. The family will receive visitors Tuesday, September 7, 2021 from 6-9PM at Sovereign Grace Baptist Church, 14703 Silverdale Drive, Woodbridge. Services will be held Wednesday, September 8, 2021 with a viewing from 9-10AM and the service from 10-11:30AM with interment to follow at Stafford Memorial. In lieu of flowers, our dad was a firm believer in sharing the Gospel to as many people as he could. He also believed strongly in missionaries around the world doing the same thing. There are a few missionaries that he greatly adored and provided support, but one in particular was his favorite. Dr. Dodson, for many years, has been spreading the Gospel in Tanzania as well as surrounding cities in Africa. If you would like to make a donation in lieu of flowers, you can send a check to: Sovereign Grace Baptist Church 14703 Silverdale Rd. Woodbridge VA 22193 In Memo put Jack Inge

Jack Conrad Inge of Woodbridge, VA went to be with the Lord & Savior on August 30, 2021 at Inova Fairfax Hospital surrounded by his family. Jack was born on March 19, 1941 and grew up in Chase City, Virginia. He was the son of James Conrad... View Obituary & Service Information

The family of Jack Conrad Inge created this Life Tributes page to make it easy to share your memories.

Jack Conrad Inge of Woodbridge, VA went to be with the Lord &amp;...

Send flowers to the Inge family.