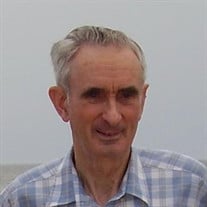 J Richard (Dick) Gauthey Dick was born March 8, 1932 in Baltimore, MD. He graduated from Staples High School in Westport, CT and went on to study mechanical engineering at Cornell University. He was a member of Lambda Chi Alpha fraternity and in the Navy ROTC program while at Cornell. He met his wife Janet at Cornell and they married after graduation in the summer of 1955. Dick was commissioned in the Navy which took them first to Newport, RI and then to Norfolk, VA, where their son Tom was born. They then moved across the country to Berkeley, CA, where he obtained a masters degree in fluid dynamics and added daughter Julie to the family. Later came moves to Rockville, MD and Pearl Harbor, HI. Dick and the family really enjoyed their time in Hawaii and Dick & Janet returned five times to visit. The next move was back to Newport for a year and then on to Charleston, SC for two years before finally moving to Springfield, VA in 1971. He held a number of positions in the Washington area until his retirement from the Navy, as a Captain, in 1985. He then taught science, math and engineering courses at Northern Virginia Community College (NOVA) for 15 years. Dick was a charter member of Burke Presbyterian Church in Burke, VA. He served on the Session, the Budget and Finance Committee, and the New Members Committee. In recent years he also served as the Treasurer of the Spiritual Life Committee at the Westminster at Lake Ridge retirement community where he lived. Known to all was Dick’s love of birds and his huge collection of bird stamps. He began bird watching when he was 11 years old, but got really serious after he graduated from Cornell, at which time he also began collecting bird stamps. He and Janet traveled around the world looking for birds, and seeing some beautiful locations as well. Brazil, South Africa, Australia, Kenya, Costa Rica and Argentina were some of the locales they visited. Dick and Janet were married for 61 years before Janet passed away in February 2017. Dick, 90, passed away on March 22, 2022 after a brief illness. Dick was preceded in death by his wife Janet, and his parents Jules L. and Philomena Gauthey. He is survived by his sisters Joan Gauthey and Diane Jenkins, son Tom (Brenda) of Eclectic, AL, daughter Julie Bradshaw of Williamsburg, VA, 3 granddaughters, Erin (Zac) Peden, Megan (Donny) Wilson, and Jessica Bradshaw, 6 great-grandchildren: Kate, Colin, and Ella Peden, and Dean, Scout and Kit Wilson, nephews Jack, Peter, and David Jenkins and niece Anne Jenkins. A memorial service will be held at 2pm on April 24, 2022 at Burke Presbyterian Church, 5690 Oak Leather Dr, Burke VA. In lieu of flowers, memorial donations may be made to Burke Presbyterian Church. A special thanks to the Burke Presbyterian Church congregation, residents and staff of Westminster at Lake Ridge and the staff of Capital Caring Hospice for their kindness and support during this time.

J Richard (Dick) Gauthey Dick was born March 8, 1932 in Baltimore, MD. He graduated from Staples High School in Westport, CT and went on to study mechanical engineering at Cornell University. He was a member of Lambda Chi Alpha fraternity... View Obituary & Service Information

The family of J. Richard "Dick" Gauthey created this Life Tributes page to make it easy to share your memories.

Send flowers to the Gauthey family.