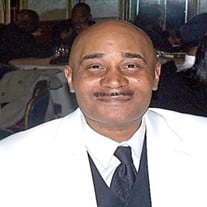 Herbert (known to many as Herb) Lewis Jordan, Jr., of Woodbridge, VA, was born January 29, 1958 to the union of Herbert Lewis Jordan, Sr. (deceased) and Ruth Evelyn Green Jordan (deceased) in Norfolk, VA. As the oldest of two brothers, Herb was quite the mischievous and adventurous one. He kept their Mom on her toes. Growing up he was always competing with his younger brother Lydell in sports. Despite their different paths, Life kept them close together. He became an avid lover of fast cars as he could always be seen cruising in his high-powered green Chevy Nova with the big tires. Herb attended public schools in Norfolk, VA, where he graduated from Norview High School. While attending Norfolk State University, he developed many lasting friendships. He became quite the card player and bowler and could often be seen in the Student Union Building honing in on his talents. After his college experience he began working in the field of endeavor which was driving. He worked for various companies driving vans and trucks of all types and sizes. Herb loved his dog Brownie very much who passed shortly before he did. They could be seen in their Dallas Cowboy gear watching a game. He loved to ridicule Lydell whenever they played the "Washington Football Team". Herb became a member of the Institute of Divine Metaphysical Research (IDMR) in 1993. It is here where he was introduced to the Creator of the Universe, Yahweh Elohim, who manifested at the end of this age as Dr. Henry Clifford Kinley, Our Father and Savior. Dr. Kinley allowed Herb to know that he must look to HIM for all things and ultimately receive an exchange which is HIS Righteous Spirit. Herb met and then married Nadine R. Walker, on June 16, 2003, and was an active member of IDMR until his transition. After a long battle with cancer Herb departed this earth on September 27, 2020. He leaves behind: his wife, Nadine Jordan, his son Anthony Bunn of Hampton, VA, his stepsons Ramon Bunn of Hampton, VA, and Joseph Johnson of Maryland, his stepdaughter Nadine Olivia Myers (Kelvin) of PA, his brother Lydell Jordan (Vanessa), his nephew Desmond Jordan. Grandchildren: Anthony Bunn Jrl, Akari Li Bunn, Aiden Bunn, Alima Evelyn Bunn, Isaiah Holmes, Chase Holmes, Ciara Myers, Kaiden Myers and a host of relatives and friends whom he loved dearly.

The family of Herbert Lewis Jordan Jr. created this Life Tributes page to make it easy to share your memories.

Herbert (known to many as Herb) Lewis Jordan, Jr., of Woodbridge,...

Send flowers to the Jordan family.