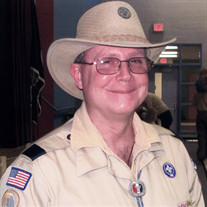 Gregory Gene Guernsey, age 64, of Dumfries Virginia, passed away on May 6, 2019. Greg was born on October 23, 1954, in Fort Monmouth, New Jersey to Richard Gene and Clora Margaret (Knox) Guernsey. Greg married Lorene Marie (Cramer) on July 25, 1992 in San Clemente, California. Greg is survived by his wife Lorene, son Phil (Megan) Guernsey, son Nicholas, and granddaughters Brielle and Hayden; sister Sonia (Gayle) Miller, niece Kylie and nephew Shawn; sister in law Kristine (Dion) King, nephews Darryl and Kyle, niece Kerri (Eric) Love; sister in law Eileen (Herrick) Johnson, nephew Matthew; sister in law Carla (Dennis) Santi. He was preceded in death by his father and mother. Greg graduated from Glen A. Wilson High School, Hacienda Heights California in 1972. He was a Cub Scout and Boy Scout, earning the rank of Eagle Scout. He attended University of California, Los Angeles with a full ROTC scholarship, and graduated in 1978 with a B.A. in Psychology. He earned an M.S. in Computer and Information Science in 1996, and a dual Ph.D in Specialties in Test & Evaluation (T&E) Management and in Software Studies in 2009. In 1978, Greg joined the Army 82nd Airborne Division at Fort Bragg, NC and was the 1980 Outstanding 82nd Airborne Division junior officer. He held Army company, battery, and task force commands and staff positions, including one year as a platoon leader in South Korea, retiring in 1989 with the rank of Captain. He received the Army Commendation Medal with oak leaves, Army Achievement Medal with oak leaves, and numerous certificates of achievement and commendation. Greg was patriotic, a dedicated soldier and leader, and proud of his service to his country. After leaving the Army, Greg became a Senior Operational Evaluator and Analyst with the US Army Operational Test and Evaluation Command in Alexandria, Virginia. He worked in many areas of test and evaluation for the Army in the Northern Virginia area as a research analyst, test officer, program director, and computer scientist. He held positions as a Program Analyst with the Office of Policy and Methodology, OPTEC (1992-93); Asst. Chief of Staff, Total Quality Management, OPTEC (1993-94); Division Chief and Senior Analyst, Army Test & Evaluation Command; (1994-2007); Director, T&E, Joint Medical Information Systems (2007-12); Director, Test and Independent Verification and Validation, DoD/Veterans Affairs Interagency Program Office; Director, Integrated Quality Assurance, (2012-16); Assistant Program Manager, T&E, Department of Defense Healthcare Management System Modernization (2016-18); and T&E Plans and Operations Lead, IPPS-A (2018-19). “G3” or “Dr. G”, as he was known, was highly committed to doing his best for his organization and supporting the Army’s mission to protect and serve America. A loving husband and father, Greg was happiest at home with his family and friends. He was very proud of both his sons, and was delighted when Phil and Megan brought granddaughter Brielle into the family. Family was very important to Greg, and he would drop everything to take care of his own. He had a generous heart and caring personality with family and friends. He was a “closet” romantic, and loved surprising Lorene with flowers. Greg was active in the Boy Scouts as a leader; he was a Cub Scout den leader for Pack 1385 and Assistant Scoutmaster for Troop 35 and attended summer camp with Nicholas for many years. Greg was famous as “the man with the hat”; he wore that Indiana Jones style hat everywhere! Greg enjoyed RV camping with family and friends, square and round dancing in the northern Virginia Area. He was a member of the local American Legion and attended St. Francis of Assisi Catholic Church in Triangle. He had a special interest in military history, especially Civil War and World War II. Greg loved to visit local battlefields and museums; he collected many books and magazines on his favorite battles and campaigns. He was a fierce competitor when playing canasta or other board games, and spent many happy hours at regular game nights with friends (always playing to win!) Visitation will be held at Miller Funeral Home in Woodbridge, Virginia on May 13, 2019 from 7:00 pm to 9:00 pm. A funeral in celebration of his life will be held on May 14, 2019 at 11:00 am at St. Francis of Assisi Catholic Church in Triangle, Virginia; followed by a reception at the family home. Interment will be at Quantico National Cemetery in Triangle, Virginia at a later date. Memorial donations may be made to Compassionate Artists, a wonderful charity that we support, to celebrate Greg’s life. http://compassionateartists.org/ “Well done, good and faithful servant…” Matthew 25:21

The family of Gregory Gene Guernsey created this Life Tributes page to make it easy to share your memories.

Send flowers to the Guernsey family.