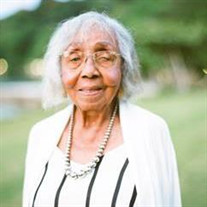 Gloria Lucille Fraser Scott, 95, passed away peacefully on January 16, 2019 in Alexandria, Virginia. Born in Jamaica, she was a distinguished development economist and pioneer in social planning and women's issues. Gloria graduated from the London School of Economics with double Honors in Economics and Sociology. She was an independent consultant, focusing on sustainable development and population issues including wealth distribution, health, education, and aging. She was the World Bank’s first advisor on Women in Development, a post created for her in 1977 to promote an understanding of key gender-related issues and develop ways to address them in operational work, resulting in a more favorable climate for improving women's options in development. Prior to that she worked as a Senior Advisor in the Department of Economic and Social Affairs at the United Nations. In 1985, she was honored by the Association for Women in Development for outstanding contributions to the Integration of Women in Development. Except for her work with the Ministry of Development in the Jamaican Government soon after her graduation from the London School of Economics, Gloria’s appointments were all to new positions of which she was the first incumbent. After retiring from the World Bank, Gloria studied and taught Yoga and the Healing Arts. She was much revered and loved by all her students. Gloria is survived by her three children, Mark, Michele, and Madeleine, and five grandchildren. A gathering and visitation will be held from 1 to 3 p.m. on Saturday, January 26, 2018 at Miller Funeral Home. 3200 Golansky Boulevard, Woodbridge, Virginia 22192. Following the service, the family invites you to join them for a time of reception at their home. Memorial donations in memory of Gloria may be made to Carpenter's Shelter in Alexandria, Virginia. https://carpentersshelter.org/give/

Gloria Lucille Fraser Scott, 95, passed away peacefully on January 16, 2019 in Alexandria, Virginia. Born in Jamaica, she was a distinguished development economist and pioneer in social planning and women's issues. Gloria graduated from... View Obituary & Service Information

The family of Gloria L. Scott created this Life Tributes page to make it easy to share your memories.

Send flowers to the Scott family.