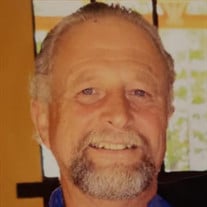 George Edward Simpson Jr., age 66, passed of natural causes on October 6, 2020, at his residence in Woodbridge, VA. George is survived by his mother Mary Simpson; his wife Cindy Freeland-Simpson; his two sons Jason Simpson and Justin Simpson; his two daughters Misty Simpson, Lindsay Erbe, and one step daughter Bridgett Freeland; his five grandchildren, Tyler Simpson, Devin Simpson, Brennan Simpson, Kayden Jackson, Aliyah Jackson, and four step grandchildren Logan Whitaker, Leonard Gaskins, Lennoxx Gaskins, Lathius Gaskins. He also leaves behind his three brothers Paul Simpson, Michael Simpson, David Simpson; four sisters Anne Briscoe, Joanie Lightner, Mary-Pat Stocks, Carol El-Bisi. He had 17 nieces and nephews; 20 great nieces and nephews (and counting). He is preceded in death by his father George Simpson Sr. and his brother William Simpson. George was born on December 23, 1953 in Alexandria, VA to parents Mary and George Simpson. He attended Bishop Ireton Catholic School and went on to graduate from Hayfield High School in 1972. He later attended Northern Virginia Community College in 2013 and obtained a Certificate in Substance Abuse Rehabilitation Counseling. He was a retired UPS truck driver and brick layer. George was the oldest of nine, and a single Dad to his children. He was a very sweet and loving husband to his wife of 14 years. He enjoyed life, was full of fun and a child at heart - they all loved “uncle glute”. The rebellious individual he was with only 30 days clean (because the old-timers with dust coming out their mouths were telling him he couldn’t do it), started the first Cocaine Anonymous meeting in Woodbridge VA on November 9th 1996. He passed believing in a loving God of his understanding. His memory will be kept alive by those he touched along the way throughout his journey on earth. We have ALL lost a remarkable individual. He knew everybody (it seems that way anyway) no matter where you went with him, the grocery store, restaurants, wherever – he struck up a conversation with anybody. Other than his family, he loved “Rock-N-Roll”, guitars and of course his Converses (he had 30 pairs) – oh yes, he was also an Alien from Pluto! Help us celebrate his life. The family requests that you come as you are, nothing special. Wear your Chuck Taylors (Converse) if you have them in honor of him. And as George would say – “you ROCK!”

The family of George Edward Simpson Jr created this Life Tributes page to make it easy to share your memories.

Send flowers to the Simpson family.