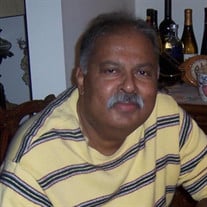 Gangadar Lalchan Sohan passed away unexpectedly on March 21, 2022 at the age of 73. He was surrounded by his loved ones. He was born on March 6, 1949 in Ramsabad Trace in Penal, Trinidad and Tobago to Basso and Nagassar Sohan. At 18 years old with a few TT dollars in his pocket, he immigrated to the United States not realizing it was his birthday in 1967. Determined to make a better life for himself he left behind his parents and 5 younger siblings. He moved in with his Uncle in Washington, DC who took him under his wing and showed him the “American way”. After settling in, he immediately began working as a bus boy at the Gramercy Hotel in DC where he met his future wife, Paulina, a native Bolivian. Communication was an obstacle. He had a thick Caribbean accent and she spoke only Spanish, but love was their language and a romance began. Six months later, he changed his career path and landed a job at Johnston Lemon & Company, an investment brokerage firm. His love for math and quick skills for computing numbers in his head, long before calculators became popular, was his passion. On July 9, 1968 they got married and soon had their first daughter. As a new father, he was determined to make a better life for his growing family and began his studies at Howard University. He graduated with a Bachelor of Arts degree in Economics in 1972. Sohan enjoyed playing the popular West Indian sport, cricket, deep sea fishing, hunting, and spending time with family and friends. In 1974, he founded the first West Indian Cricket team in Washington, DC named Trindies Cricket Club (TCC). In 1976, TCC was officially recognized by the Washington Cricket Club. In 1977, he welcomed twin girls to his family. Twins and triplets are common amongst the Sohan family. Becoming a family of 5, he moved out of the city to the suburbs in Lorton, Virginia, where he spent the remainder of his life. He retired at the age of 62 after forty-four years in the brokerage industry. Koonce Securities was his last employer where he spent the most memorable years of his life with an amazing group of people. Sohan is survived by his wife of 53 years Paulina; children Patricia Ficik (Robert), Brenda Karpaiya (Anil), Tania Sohan (Vonn); and his grandchildren Kevin, Mya, Lea, Kayla, Aiden, Ethan, and Cameron as well as his siblings Kosh, Molly, Suresh, Ramesh, and Maltee. Visitation will be held on Thursday, March 31, 2022 from 5:00 to 8:00 p.m. at Miller Funeral Home, 3200 Golansky Boulevard, Woodbridge, VA 22192 Mass of the Resurrection is scheduled on Friday, April 1, 2022 from 11:00 a.m. at Our Lady of Angels Catholic Church.

Gangadar Lalchan Sohan passed away unexpectedly on March 21, 2022 at the age of 73. He was surrounded by his loved ones. He was born on March 6, 1949 in Ramsabad Trace in Penal, Trinidad and Tobago to Basso and Nagassar Sohan. At 18 years... View Obituary & Service Information

The family of Gangadar Sohan created this Life Tributes page to make it easy to share your memories.

Send flowers to the Sohan family.