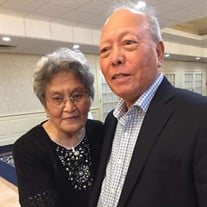 Esmeralda B Perez, also known as Neneng, 87, of Woodbridge, VA died peacefully at Sentara Northern Virginia Medical in Woodbridge on 23 December 2018. She was born on 9 December 1931 in Batangas City, Batangas, Philippines to Miguel and Estrella Babasa who precede her in death. She came to the United States in 1966 in pursuit of her Masters degree at New Mexico State University but had a change of plans in December 1966 while she was on holiday in San Diego, CA where she met the man she’d marry two weeks later. Mrs Perez retired from a career at The Alexandria Hospital in 1998 after 20 years of service, but her roles as a wife, mother, and friend were most important. She was the wife of USN Ret CPO Eriberto S Perez, who survives. They were approaching their 52nd wedding anniversary on 7 January 2019. She is also survived by son, Rev. Edwin E Perez of Woodbridge, VA and Earle E Perez of Mebane, NC, and daughter Eileen B Perez of Mebane, NC. Mrs Perez was exceptionally proud of her grandchildren, Emerald “Ella” Smuzynski and USMC PFC Aristotle “Aris” Smuzynski, both of Mebane, NC. She found great joy in being a grandmother and was committed to being a supportive and nurturing Lola to her only grandchildren. Mrs Perez was also affectionately known as a Tita and Lola to friends-like-family throughout Northern Virginia, Maryland, and DC. Siblings, cousins, nieces, and nephews in the Philippines survive her as well. Mrs Perez was a devout Catholic who leaves a legacy of loving and serving the Lord through her generous and compassionate spirit. This lives on through her son, Father Perez. Mrs Perez was an accomplished pianist who shared her gifts through entertaining friends and instilling her love of music in her children. This lives on through her son, cellist Earle Perez. She was a loving mother who inspired her daughter, Eileen, to raise a family of her own. Her family thanks all who visited Mrs Perez in her final weeks and surrounded her with love and laughter. A very special thank you to her nurses and doctors at Sentara who ensured her comfort in her final days. The family will receive visitors Sunday, December 30, 2018 from 5-8 p.m. at Miller Funeral Home, 3200 Golansky Blvd., Woodbridge, Virginia 22192. A Mass of Christian Burial will be held Monday, December 31, 2018 at 10:30 a.m. at Saint Elizabeth Ann Seton Catholic Church, 12805 Valleywood Drive, Woodbridge, Virginia 22192 with interment to follow at Quantico National Cemetery 12 p.m.

Esmeralda B Perez, also known as Neneng, 87, of Woodbridge, VA died peacefully at Sentara Northern Virginia Medical in Woodbridge on 23 December 2018. She was born on 9 December 1931 in Batangas City, Batangas, Philippines to Miguel and Estrella... View Obituary & Service Information

The family of Esmeralda B. Perez created this Life Tributes page to make it easy to share your memories.

Esmeralda B Perez, also known as Neneng, 87, of Woodbridge, VA...

Send flowers to the Perez family.