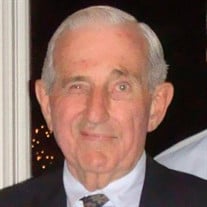 Ernest (“Ernie”) Aaron Arnold was joined with his Heavenly Father on October 3, 2020, shortly after suffering a stroke. Born in Hempstead, NY on October 4, 1932, Ernie was the son of Fred Arnold and his wife Augusta Arnold. He was pre-deceased by his mother, father, older sister Alice Ann (Haab), and his devoted wife of 58 years, Carol Larson Arnold. He is survived by sons Mark Arnold and Eric Arnold, daughter Kristin Arnold, daughters-in-law Karen Arnold and Katherine Arnold, eight grandchildren: Mitchell, Nicholas (Mary Margaret), Trey, Hailey, Lauren, Elise, Briana (Windhausen), Lindsey (Windhausen), one great granddaughter, Megan, sister-in-law Audrey Jean and her husband John Westberg, and brother-in-law George Haab. Ernie grew up on Long Island, NY and graduated from high school in Oceanside, NY. His youth was spent playing sports (earning 8 varsity letters playing football, basketball and baseball), and spending as much time as he could swimming and body-surfing at nearby Jones Beach. He moved on and attended Dartmouth College. He interrupted his college studies (by his own admission this was at the insistence of a Dean at Dartmouth) and entered the US Army, eventually earning a spot in Officer’s Candidate School. He spent 3 years in the Army, including serving as a First Lieutenant and Artillery Unit Commander stationed in Germany. Following his resignation from the Army, Ernie returned to Dartmouth and received his degree as a history major. Ernie started his corporate career with Scott Paper Company as a salesman, putting to good use his ample conversational skills. A promotion landed him in Billings, Montana. Billings must have seemed like a new world to Ernie, and it was made much more interesting as a result of a blind date with a young high school teacher, Carol Larson, who had moved there from her family’s farm in Minnesota. Ernie and Carol hit it off in spectacular fashion and were together through thick-and-thin until Carol’s death earlier in 2020. Ernie moved through a series of new jobs and new towns with his wife Carol and their growing family, spending time in Philadelphia, PA, Morton and Lisle, IL, and eventually settling in Penfield, NY in 1973, where all of Ernie and Carol’s children graduated from high school. Over the years, Ernie worked as a sales executive primarily in the grocery industry. During this phase of his life, Ernie enjoyed coaching and watching his kids play sports, doing yard work (a lifelong obsession/pleasure), and playing tennis. While he didn’t grow up playing tennis, Ernie grew to love the game and took great pleasure in particular in rifling his effective, left-handed slice serve wide to the ad court and his right-handed opponent’s backhand. In early 1987, on a snowy but somewhat typical Penfield day, right before heading off to work, Ernie kissed Carol goodbye, and told her he was looking forward to celebrating her 50th birthday later that evening. That morning, Ernie was involved in a devastating accident, as his car was hit by a milk delivery truck. Ernie suffered, among other things, a traumatic brain injury (TBI), and spent three months in the ICU, hospital and rehabilitation centers before making it back home. Over the next several years, Ernie, with Carol and his family at his side, put in the hard work to get healthy. While the TBI had impacted some of his cognitive skills, Ernie poured himself into the physical and cognitive rehabilitation to get back to work, which he eventually did. His accident also generated a newfound love of volunteering. He became a fixture with a number of charities over the years, particularly those focusing on individuals with disabilities. He was named Volunteer of the Year along with a commendation for Spirit of Service by Brain Injury Services in 1998. He also spent many years volunteering at Camp Good Days and Happy Times in the Finger Lakes region of New York, and Camp Rainbow in Virginia. Ernie’s early days spent at Jones Beach served him well as he often worked the “waterfront” areas of these camps. It was never completely clear who was having a better time at these camps, Ernie or the campers. After retiring from the corporate world, Ernie and Carol eventually moved to Northern VA to be near family. Since 1998, Ernie has been an active member of Old Bridge United Methodist Church, where he has enjoyed doing yard work and other odd jobs to help keep the church looking sharp. He has been particularly involved in serving the homeless directly and via food missions where he loved to spread cheer to those needing a little bit of help. Ernie loved talking to people, family, neighbors, friends or strangers, usually about sports or the weather, and loved passing along small acts of kindness, whether picking up trash, or providing someone with a brief card or candy to make them feel appreciated. Due to the pandemic, a memorial service will be deferred until an appropriate time in 2021. In lieu of flowers, please consider a donation of time or money to the charity of your choice in his name.

Ernest (&#8220;Ernie&#8221;) Aaron Arnold was joined with his Heavenly Father on October 3, 2020, shortly after suffering a stroke. Born in Hempstead, NY on October 4, 1932, Ernie was the son of Fred Arnold and his wife Augusta Arnold. He was... View Obituary & Service Information

The family of Ernest ("Ernie") Aaron Arnold created this Life Tributes page to make it easy to share your memories.

Ernest (“Ernie”) Aaron Arnold was joined with his Heavenly Father...