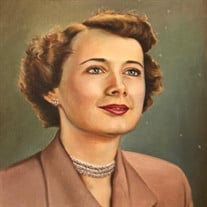 Eileen Mary Muirragui, 91, of Bethesda, Maryland and Montclair, Virginia, died in her sleep on January 29, 2022 at her home in Virginia. She was born in San Francisco, California to John Francis Mullaney and Sarah Bridget Bevans, immigrants from Ireland who owned a small ‘mom and pop” grocery store on Castro Street. A highly intelligent child and devoted daughter, at age 8 she prepped her parents for naturalization as U.S. citizens. Later, as a teenager, she taught her father how to drive. She helped at the Castro Street store and excelled as a student, encouraged by her parents who had only reached a third-grade level education in Ireland. She received a scholarship to study at San Francisco College for Women where she majored in French and Spanish. She was the first woman in her family to graduate from college from among over 40 first cousins in the United States and Ireland. In 1953, she married Gilo Muirragui, a lawyer and economist from Ecuador, who fell in love with her at first sight. She accompanied her new husband to Boston where he pursued a graduate degree at Harvard University. After his Harvard graduation he worked as an international economist in dozens of countries. The family, which came to include two daughters, lived for over ten years in Ecuador and Paraguay. They all travelled extensively and explored the world together. She made many friends throughout her life in many places and excelled in maintaining contact. She always remembered birthdays and other special occasions, sent condolences when needed, and wrote beautiful letters to friends and family in the best Catholic school penmanship. She contributed financially to many causes. Her professional career included working for the Fulbright Commission, one of the most prestigious scholarship programs in the world to improve inter-cultural understanding. In her later years, she worked at a Bethesda, Maryland travel agency from which she finally retired at age 85, saying “it was probably about time.” After retiring, she moved from Bethesda, Maryland to Montclair, Virginia where she spent her final years enjoying the tranquility of life in a home on Lake Montclair with her husband of 68 years and living near her two daughters. The Irish have traditionally believed in three birthdays: the day of birth, the day of Baptism, and the day they enter Heaven. She must have been eager to enter Heaven only a few days from her 92nd birthday. Since she loved to dance, she is undoubtedly now dancing with the angels, her father fiddling, her mother clapping. On her last night of life, from her bed she gently waved and blew a kiss to her husband. Eileen Mary was the beloved wife of Gilo Muirragui; dedicated and generous mother of Eileen Isabel and Maureen Elizabeth Muirragui; loving grandmother of Jason, Sam and Matthew Muirragui; devoted sister of John Francis Mullaney, Jr. (Teresa Estrada) and aunt of John Francis Mullaney, III. She will lie in final repose at historic Congressional Cemetery in Washington, D.C. where her family will honor her life at a graveside burial ceremony on February 10, 2022. A remembrance Mass will be held at Our Lady of Lourdes Catholic Church in Bethesda, Maryland on March 13, 2022 at 9 a.m. In lieu of flowers, the family requests that you “find the good” and do something kind for someone; and/or, in her memory, contribute to a cause or organization meaningful to you.

Eileen Mary Muirragui, 91, of Bethesda, Maryland and Montclair, Virginia, died in her sleep on January 29, 2022 at her home in Virginia. She was born in San Francisco, California to John Francis Mullaney and Sarah Bridget Bevans, immigrants... View Obituary & Service Information

The family of Eileen Mary Muirragui created this Life Tributes page to make it easy to share your memories.

Customized sympathy cards. Mailed for you.