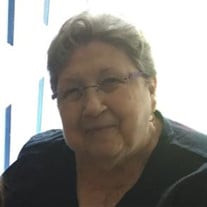 Diane Louise Boudreaux Russell, 82, parted to be with the Lord on February 7th, 2021, surrounded by her loved ones at home. She was residing with her daughter and son-in-law in Woodbridge, Virginia at the time of her death. She succumbed to the kidney disease she had fought against for many years. Her school years were spent in Harvey, Louisiana. There is where she met the love of her life, Ira Russell, whom she married in 1957. She was able to be a stay at home mom until her children were in their teens. Her husbands job moved them to Fort Smith, Arkansas and then Woodbridge, Virginia. She worked in the cafeteria at R. Dean Kilby School in Prince William County for several years. She then decided to pursue a career as a pharmacy technician. She worked at Forestwood Pharmacy in Manassas, Virginia and then Rite Aid in Bealeton, Virginia, for 20 years. She resided in Remington, Virginia during this time with her husband Ira. She retired at the age of 73 due to illness. After retiring she was able to enjoy bingo and lunches with friends and lots of family time. She enjoyed watching game shows such as Wheel of Fortune, Jeopardy, Let’s Make a Deal, and the Price Is Right. After her husband had a stroke in 2019, they moved in with her daughter and son-in-law in Woodbridge, Virginia who cared for her until her last breath. She is preceded in death by her parents, Joseph and Evelyn Boudreaux, siblings Donald Boudreaux and Ann Ripp, and her son Ira Russell Jr. She is survived by her husband of over 63 years, Ira Russell Sr., her daughter Doanne Kandetzki, and her husband Walter Kandetzki Jr. She is also survived by her grandchildren Ashley Beruete, Walter Kandetzki III, Matthew Kandetzki, and Alexis Kandetzki. She is survived by 6 great grandchildren, Daniel, Caleb, Brianna, Caroline, Gabriel, and Giovanni, along with many nieces and nephews. As well as, her cousin Debbie Bonner and husband Al. Per her wishes, her cremation is being handled by Miller Funeral Home in Woodbridge, Virginia. She did not want a service and she would like to return to her favorite place, Nags Head, North Carolina.

Diane Louise Boudreaux Russell, 82, parted to be with the Lord on February 7th, 2021, surrounded by her loved ones at home. She was residing with her daughter and son-in-law in Woodbridge, Virginia at the time of her death. She succumbed to... View Obituary & Service Information

The family of Diane Louise Boudreaux Russell created this Life Tributes page to make it easy to share your memories.

Diane Louise Boudreaux Russell, 82, parted to be with the Lord...

Send flowers to the Russell family.