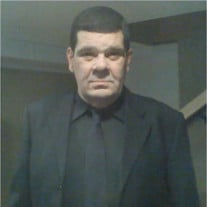 “I like to call myself a "wide-spectrum technologist" since I am as comfortable with hands-on hardware as I am with software development and all much of technology and science in general. These are both my work and my "sport" and always have been. I am also a long-time believer in the power and reality of God Almighty and our Saviour Jesus Christ.” Daniel J. Karnes Daniel Joseph Karnes passed away at his residence in Woodbridge, Virginia on Wednesday, October 10, just a little more than a month short of his 63rd birthday. While traveling to Hot Springs, Arkansas to meet an internet friend, Daniel was introduced to Nancy by his friend David. Daniel was baptized at Antioch Baptist Church in Royal, Arkansas and later married Nancy in the same church. They celebrated their 25th wedding anniversary in January this year. Dan was born in 1955 in the General Hospital in Los Angeles, California. His twin was given away at birth. He was the son of Ethel Bernice Webb and Raymond Dencil Karnes. He was preceded in death by his parents, his twin brother, and his sister Carol's twin brother. He is survived by his wife, Nancy, a step-daughter, Heather, and his two sisters, Carol and M. Linda. Dan grew up in East L.A. with a love of reading and learning about a wide variety of subjects. He attended Woodrow Wilson Senior High in Los Angeles, California and although he didn't graduate from high school, he did earn his GED and continued to self-educate himself through books and personal investigation. He considered himself an SME (subject matter expert) on volcanoes, earthquakes, geology, astronomy, radioactive material, computer hardware and software, the internet, OSINT (Open Source Intelligence), and more. It was rare to find anything he could not speak intelligently about, and he loved sharing his knowledge with others. Daniel loved to take family outings to see the earthquake fault lines, hot springs, search for radioactive rocks and other fun stuff. He had Emperor Scorpions as pets (the HUGE ones he saw on Fear Factor). Dan was also very fond of cats and dogs, he even took in a lost (or abandoned) Giant Rottweiler puppy that showed up on his doorstep and was never claimed. Daniel enjoyed music, his favorites included Johnny Cash and June Carter (Jackson, Ring Of Fire, Juke Box Blues) and Paris Hilton (Stars Are Blind, Nothing In This World). He mentioned he had on one occasion played guitar with Eddie Van Halen. His favorite movies included Walk the Line (Joaquin Phoenix, Reese Witherspoon) and Charlie Wilson's War (Tom Hanks, Julia Roberts). Dan had worked with Federal Reserve in Washington, DC Booz Allen Hamilton in Herndon, Virginia Stanley Associates Inc. in Alexandria, Virginia MDI Security Systems, in both Rancho Cucamonga, California and San Antonio, Texas Schaeffer Industries, Mira Loma, California Kasanjian Research in Blue Jay, California Exactax Inc. in Anaheim, California Damirus Corporation/Pencil Pushers Tax Software in Burlington Massachusetts Aviation Simulation Technology in Bedford Massachusetts/Hanscom AFB Conversion Equipment Corporation in Orange, California Sawyer Industries Corporation in Arcadia, California Daniel loved this country and served it well. He received awards from the Director of the United States Secret Service for outstanding performance on the White House Access Control System. Over the years, as a government contractor, he had contact with five U.S. Presidents (George H. W. Bush, Bill Clinton, George W. Bush, Barack Obama, and Donald Trump). Daniel's hobbies included Work, Technology, Electronics, Computers and Programming, Ham Radio (WA6NDT), Science, and Reading. Private services will be held. In lieu of flowers, the family is requesting financial assistance for services provided by Miller Funeral

&#8220;I like to call myself a "wide-spectrum technologist" since I am as comfortable with hands-on hardware as I am with software development and all much of technology and science in general. These are both my work and my "sport" and always... View Obituary & Service Information

The family of Daniel J. Karnes created this Life Tributes page to make it easy to share your memories.

“I like to call myself a &quot;wide-spectrum technologist&quot; since I...

Send flowers to the Karnes family.