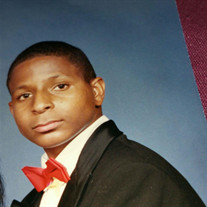 Daniel Jackson, 46, died suddenly August 10, 2019, at his residence in Triangle, VA. Born September 19, 1972, in Washington, DC he grew up and lived most of his adolescence in DC. He moved to Manassas, VA in April, 1989. As a child he was very curious and full of wonderment and readiness to learn about himself and his surroundings. One of his teachers observed that he seemed to be wondering into space in the classroom but when called upon he always answered correctly. He had a brilliant mind and was incapable of turning his back on a friend. He studied the ancient religions of Africa, Egypt, Europe, Greece and Rome and would speak for hours on the subjects; he was fascinated with the Egyptian pyramids and had a photographic memory. He had a heart of gold. Surviving is his daughter, Brittany Kiser, grandson, Elijah Tolen; mother Augusta Jackson; brother William Jackson, Jr.; sister Samantha Jackson; great-aunt, Margaret Gross; aunts; Mary Bell, Christine Jackson, Nancy Millard and Valerie Jackson; uncle, William Newberry, numerous cousins and many friends. Predeceased is his father, William Jackson, Sr.; grandmothers, Rosa Bell and Madeline Jackson. A funeral reception (repast) will be held following funeral services at: Old Towne Sports Pub 8971 Center Street Manassas, VA 20110

The family of Daniel Jackson created this Life Tributes page to make it easy to share your memories.

Send flowers to the Jackson family.