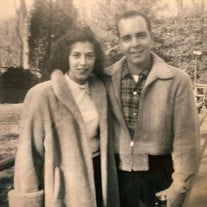 On Sunday, August 2, 2020, Clyde Allen Butler Sr., loving husband, father, grandfather, great grandfather and true American patriot passed away at the age of 85. Clyde was born in Queens, New York on March 22, 1935 to Edward and Mae Butler. He spent his life dedicated to his family and the United States. He first enlisted in the Marine Corps in the final days of the Korean war. Dad then joined the Air Force where he was sent to Vietnam, there he earned a Bronze Star! In the Air Force dad rose to the rank of Master Sargent the rank he retired at. Dad valued education for himself and his family. He earned his Masters Degree in Criminal Justice at George Washington University. He worked thirty years for the Bureau of Federal Prisons and quickly moved up the ranks to Major. Further expanding his service to our country he then joined The Army National Guard ever vigilant to serve & protect our country. In the Army he rose to the rank of Captain at which he retired. He then joined the civilian work force for Contel & General Dynamics where he was the Director of Security. On July 29, 1957 Dad Married Barbara Jeanne Shaw. They raised four Children: Linda, Jeanne, Allen and David. Clyde was preceded in death by his father Edward, mother Mae, brother Edward and the love of his life Barbara. Dad was married to mom for 57 years! Clyde is survived by his children: Linda and Jim Wagner, Jeanne and Hal Yawberg, Allen and Suzanne Butler and David Butler. Also, by ten grandchildren, Bradley and (Ashley),Bryan and (Monica), Christopher and (Keri), Michael and (Selma), Jon, Kristen and (Isaac), Scott, Ashley and (Matt), Natalie and (Javier),and Lisa. Additionally, eleven great grand children: Trestin, Jalen, Lexi, Aubrey, Colton, Aidric, Cambria, Annalise, Matthew, Sabina and Mason. In lieu of flowers please make a Donation to: Alzheimer's Foundation of America, Dementia Society of America, Vitas Hospice, or Pancreatic Cancer Foundation. Viewing will commence at 10:30 a.m. and will end at 11:30 a.m. on August 12, 2020 at Miller Funeral Home 3200 Golansky Blvd, Woodbridge, Virginia. Due to Covid-19, a private funeral ceremony will be held, as well as a private burial ceremony at Quantico National Cemetery, 18424 Joplin Rd, Triangle, VA.

The family of Clyde Allen Butler Sr. created this Life Tributes page to make it easy to share your memories.

Send flowers to the Butler family.