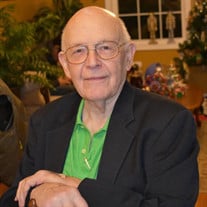 Maj. Charles A. Turpin (USMC, retired), age 93, died peacefully August 8, 2019, while surrounded by his family at Fairfax Hospital. He was born December 28, 1925, in Georgia to Charles Noel Turpin and Florida Evans Turpin. In March 1943, Charles enlisted in the Marine Corps and began his career in service to our country. He served aboard the USS Boxer (CV-21) during the Korean War. Following assignments in China, Okinawa, North Carolina, Virginia, and California, Charles retired from the Marines in 1966 and moved his family to Maryland where he was employed as a technical writer for RCA, Xerox Data Systems, and G.E. for many years. Charles was an avid reader, a history buff, a whiz at all things involving computers and electronic devices and became the family’s amazing deejay during his later years as he provided a surprisingly wide-ranging selection of music to entertain friends and family during family gatherings, parties, and special events. He loved his large blended family and was deeply loved and cherished in return by all of them. He was preceded in death by his parents, his brother Wilbur Turpin, his first wife Adella Ramirez Turpin, his son David P. Turpin, and his step-son Roger Y. Gomez. Charlie is survived by his loving wife, Maria Amaya Turpin; his children, William Turpin, Joseph (Melanie) Turpin, Sofia (David) Dubinsky, Michael Turpin; his step-children, Mariflor Montiel, Gloria Gomez, Pedro (Consuelo) Gomez, Nicholas Gomez, Maybelis (Manuel) Fernandez, and Frank Trevino; his sister Betty Howell, his brother James Turpin, as well as numerous grandchildren, great grandchildren, and great great grandchildren. The family will receive visitors from 5 p.m. to 9 p.m. on Thursday, August 15 at Miller Funeral Home and Crematory, 3200 Golansky Boulevard, Woodbridge, VA. 22192. Services are scheduled for 11 a.m. on Friday, August 16 at Our Lady of Angels Catholic Church, 13752 Mary’s Way, Woodbridge, VA 22191. Interment will be at Arlington National Cemetery January 14, 2020 at 11 a.m..

The family of Charles A. Turpin created this Life Tributes page to make it easy to share your memories.

Send flowers to the Turpin family.