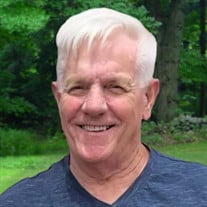 Charles “Charlie” Andrew Cates, 74 of Dumfries, VA, formerly Texarkana, TX, passed away on Sunday, June 20, 2021 after a sudden illness. Charlie was a loving husband, and active father to his six children and nine grandchildren. He was a longtime resident of Northern Virginia, dedicating his professional career to public service with the Federal Government. His time in the Government took him around the world and sparked his love for travel, which he did extensively with his wife by his side. He developed a particular connection with Germany during their European tours and brought back a love for a good cold ‘brewski’. He received his Bachelor’s and Master’s degrees from Texas A&M University and was a dedicated 12th Man, and on most days Charlie could be found enjoying old Hank Williams records while watching his beloved Aggies play. Born on Friday, May 2, 1947 in Sulphur Springs, TX, he was the son of the late Albert Andrew Cates and late Dessa LaDell Frost Cates. He is preceded in his death by his beloved wife, Patricia Joan Dodge Cates of Dumfries, VA. He leaves behind his children, Stacey Fetz and husband Thom of Borden, IN, Jody Cates and wife Rita of Borden, IN, Heather Fulkerson and husband Nathan of Fredericksburg, VA, Andrea McCary and husband Patrick of Austin, TX, Brandon Cates of Dumfries, VA, and Brittney Cates of Arlington, VA; grandchildren Todd Jordan Adams, Evan Adams, Ryan Adams, Austin Cates, Dustin Cates, Abram Fulkerson, James Fulkerson, Miles McCary, and Drew McCary. A memorial gathering will be held for friends and family at the Cates’s Dumfries residence on Saturday, June 26, 2021 at 2:00 pm.

The family of Charles "Charlie" Andrew Cates created this Life Tributes page to make it easy to share your memories.

Send flowers to the Cates family.