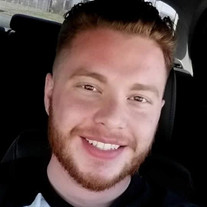 Austin Coleman Hodge, age 24, of Woodbridge, Virginia died February 20, 2019, at his home in Woodbridge, Virginia. He is survived by his father, Anthony Lagree Hodge Jr. (wife Alex Hodge) of Woodbridge, Virginia, and mother, Nena Hanna of Covington, Virginia. He is preceded in death by his grandfather, Anthony Lagree Hodge Sr. and grandparents Robert J. Hanna Sr. and Mary Coleman Hanna. He is survived by his great-grandmother, Stella Black, grandparents, Richard and Patricia Wallace; three brothers, Glen Williams, Anthony Lagree Hodge III, Vincent Reeder and many loving aunts, uncles, cousins, nieces, and nephews on both sides, whom he loved dearly. He was loved by his family and friends, and will be greatly missed. Austin was born November 15, 1994 in Covington, Virginia. He bravely served in the 23rd Military Police Company of the 91st Military Police Battalion at Fort Drum, New York. He was an avid lover of cars, skydiving, and sports, especially football and bowling. During the last few years he developed a love of skydiving and was working on completing his “A” license certification. Austin will be greatly missed by everyone that knew him. He was the kind of young man that anyone would be proud to call son, grandson, and friend. His funeral services will be held on Monday, February 25, 2019, at 1:00 p.m. at Miller Funeral Home in Woodbridge, Virginia.

The family of Austin C. Hodge created this Life Tributes page to make it easy to share your memories.

Send flowers to the Hodge family.