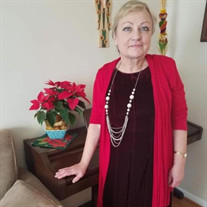 Aleksandra “Ola” Magdalena Zajackowski, age 62, of Woodbridge, VA passed away on Thursday, February 20, 2020 after a prolonged illness. She was surrounded by family and friends during her final weeks at Walter Reed National Military Medical Center in Bethesda, MD. Aleksandra was preceded in death by her parents, the late Wieslaw Pyczek and the late Wanda Pyczek (nee Jedrszczyk) of Cracow, Poland. Aleksandra is survived by her husband of 38 years, Donald Zajackowski; her son, John-Paul Zajackowski, of Berryville; her daughter, Monica Zajackowski, of Woodbridge, VA; and by her brother, Slowomir Pyczek, his wife Gosia Pyczek, both of Cracow, Poland, along with several nieces and nephews and their spouses. Aleksandra retired from the Army and Navy Club, in Washington, DC, in July 2019 after serving as the Librarian for 23 years. She completed her Master of Library Science degree from the University of Maryland, College Park in 1995. Aleksandra had previously completed a Master of Arts degree in English at the Justus Liebig University in Giessen, Germany while her husband was stationed in Germany with the U.S. Army. She had also previously studied at the Jagiellonian University in her hometown of Cracow, Poland, but her studies were interrupted with the declaration of martial law in Poland in December 1981. While traveling to the United States during the Christmas Holiday Season, to complete research for her Master’s Thesis and to visit who was to later become her husband, Aleksandra flew out of Poland on the last flight from Warsaw just prior to the Communist government’s declaration of martial law and the closing of the borders. Studying and working throughout Europe, Aleksandra was fluent in four languages: her native Polish, English, German, and Russian. Always excited about the beauty and richness that this life has to offer, Aleksandra tried and mastered several forms of art, including painting and felting (fabric art) which her friends marveled over and coveted! Aleksandra wrote several books for children, edited, and wrote reviews of Polish books. She played the piano as well as the guitar at sing-alongs with her friends! She took up Latin Dancing with her salsero, “Donaldo.” She enjoyed taking in cultural events and undertaking outdoor activities, such as hiking, kayaking and canoeing, as well as traveling, with her husband. Aleksandra was loved and admired by many for her zest for life, all the more so as she struggled for over 13 years with cancer. She was a friend and helpmate to all, and her children’s friends knew her as “Momma Z.” On Friday, March 6, 2020, a Gathering is scheduled for 10:00 a.m. in the St. Mary’s Room of Sacred Heart Catholic Church, 12975 Purcell Road, Manassas, VA 20112. A Funeral Mass will be held for Aleksandra at 11:00 a.m. at Sacred Heart, followed by a Reception from 12:00 noon – 1:30 p.m. in the parish hall, downstairs. Inurnment will be held on Saturday, March 7, 2020 at the Seton Columbarium in Mount Saint Mary’s Cemetery in Emmitsburg, MD at 4:00 p.m., preceded by a memorial Mass at 3:00 p.m. at the adjacent National Shrine Grotto of Our Lady of Lourdes, a particularly favorite place of Aleksandra and her husband. In lieu of flowers, the family asks that donations be made to The Foundation for Women’s Cancer at www.foundationforwomenscancer.org in honor/remembrance of Aleksandra Zajackowski. Donations may also be made by check to The Foundation for Women’s Cancer, 230 W. Monroe, Suite 710, Chicago, IL 60606. Please note on your check that your donation is in memory of Aleksandra Zajackowski.

Aleksandra &#8220;Ola&#8221; Magdalena Zajackowski, age 62, of Woodbridge, VA passed away on Thursday, February 20, 2020 after a prolonged illness. She was surrounded by family and friends during her final weeks at Walter Reed National Military... View Obituary & Service Information

The family of Aleksandra "Ola" Magdalena Zajackowski created this Life Tributes page to make it easy to share your memories.

Send flowers to the Zajackowski family.